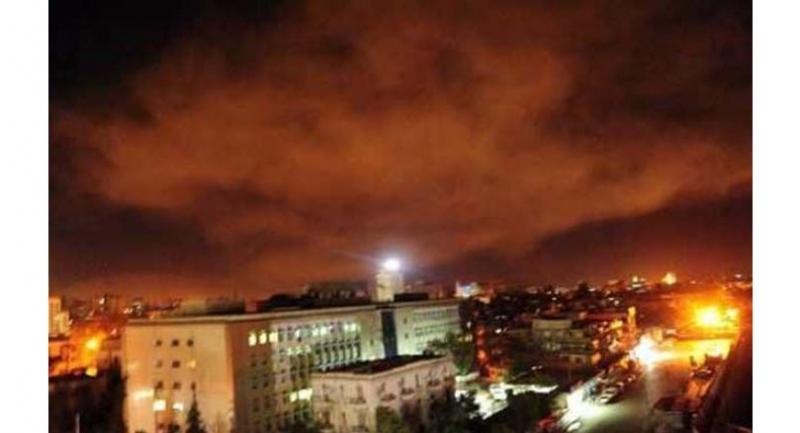 A photo of the US-led strikes on the outskirts of Damascus. (AFP)

Beirut, Lebanon - From the bloody repression of peaceful protests against President Bashar al-Assad's regime to several foreign interventions, below are key dates in Syria's civil war.

The conflict has left more than 350,000 people dead, according to the Britain-based Syrian Observatory for Human Rights. Millions more have been displaced and the country lies in ruins.

In March 2011 unprecedented protests break out to demand civil liberties and the release of political prisoners after four decades of repressive rule by the Assad dynasty.

In March 2012 regime forces retake control of the third city Homs, which had fallen into the hands of the rebels. It carries out other bloody operations, notably in the central city of Hama, after massive anti-regime protests.

In July FSA fighters launch a battle for Damascus but the government holds firm. From 2013 regime helicopters and planes unleash crude barrel bombs on rebel zones.

In August 2013 Washington accuses the regime of killing more than 1,400 people with chemical weapons in rebel-held districts near Damascus.

In September the United States and Assad ally Russia agree on a plan to eliminate Syria's chemical weapons, averting punitive US strikes against the regime for crossing a "red line".

But since then forces on the ground, in particular from the regime, have regularly been accused of using chemical weapons.

- Rise of the jihadists -

In January 2014 hostilities between jihadists of the Islamic State of Iraq and the Levant (ISIL) and rebel groups turn into an open war in the north.

ISIL, the future Islamic State (IS) group, takes Raqa -- the first provincial capital to fall out of regime control -- from rebel forces.

The jihadist offensive allows Damascus to justify its fight as a battle against "terrorism".

In September 2014 a US-led coalition launches air strikes against IS in Syria.

The strikes benefit Kurdish groups, which since 2013 have run autonomous administrations in Kurdish-majority areas and go on to oust IS from key areas.

In September 2015 Russia launches air strikes in support of Assad's troops, who are on the back foot. Russian firepower helps turn the tables for the regime, which begins to retake rebel-held territory, including second city Aleppo in December 2016.

The peace efforts run parallel those led by the United Nations.

In April 2017 a sarin gas attack on the rebel-held town of Khan Sheikhun kills more than 80 people, prompting Washington to bomb a regime air base.

In retaliation US President Donald Trump unleashes strikes by Tomahawk missiles against the regime's Shayrat airbase.

Turkey launches an operation in January 2018 against the Kurdish People's Protection Units (YPG) which played a key role in beating back IS with US support.

Ankara is wary of Kurdish aspirations for autonomy. In March it captures the Afrin region, chasing out YPG which it labels a "terrorist group".

On February 18 the Syrian regime launches a ferocious assault on Eastern Ghouta, the final rebel-held enclave near Damascus.

In seven weeks the Russian-backed onslaught kills more than 1,700 civilians. The regime captures more than 90 percent of the area, securing negotiated withdrawals of hold-out rebels.

There are claims of a new chemical attack on April 7 in Eastern Ghouta's main town of Douma, still held by rebels, with first responders saying more than 40 people died.

The Syrian government and Russia reject the claims as the US, France, and Britain pledge a forceful response.

On Saturday the United States, Britain and France carry out a wave of punitive strikes in response to alleged chemical weapons attacks.//AFP