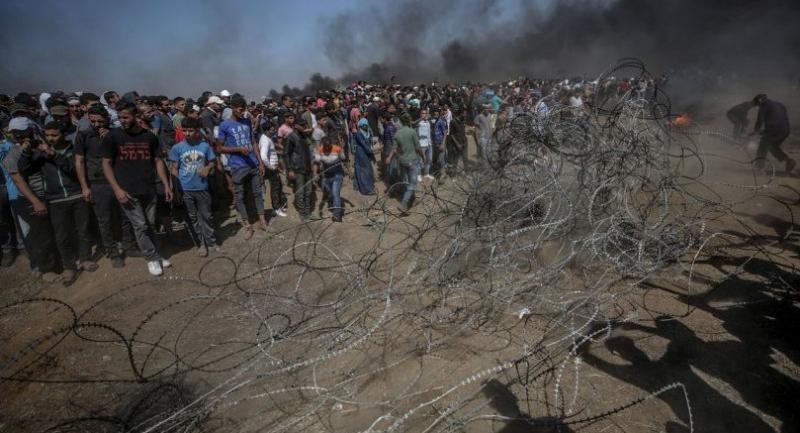 Palestinians protesters pulling barbed wire fence installed by Israeli army along the border during clashes after protests near the border with Israel in the east of Gaza Strip, 14 May 2018.

THE FOREIGN Ministry on Tuesday insisted that no Thai representative attended the opening ceremony of the US Embassy in Jerusalem, despite an earlier report.

“The Thai ambassador [in Tel Aviv] was on a business trip in Thailand [during that time],” Foreign Ministry spokesperson Busadee Santipitaks told The Nation.

Her remark followed an Al Jazeera report that Thailand was among 32 countries that have confirmed attendance at the ceremony to relocate the US embassy to Jerusalem.

The event, marking the US endorsement of Jerusalem as Israel’s capital, triggered anger among Palestinians, which caused protests and clashes resulting in more than 50 Palestinian deaths.

In December, Thailand was among 128 countries that voted in the United Nations General Assembly to support a resolution draft urging the US to revoke its endorsement to Jerasulem as Israel’s capital city.

Therefore, it would have created a diplomatic about-face if Thailand attended the embassy opening in support of the US decision. Palestinians gathered yesterday for fresh protests along the Gaza border, a day after Israeli forces killed dozens as the US embassy officially opened in Jerusalem. It was the bloodiest day of conflict in the region for years.

Palestinians yesterday marked the Nakba, or “catastrophe”, commemorating the more than 700,000 Palestinians who fled or were expelled in the 1948 war surrounding Israel’s creation.

Most of the Palestinians killed on Monday were shot by Israeli snipers, Gaza’s health ministry told AFP.

The toll included a baby who died from tear gas inhalation, along with eight children under the age of 16, the ministry said.

At least 2,400 others were wounded in the bloodiest day in the Israeli-Palestinian conflict since the 2014 Gaza war.

Meanwhile, the Thai Embassy in Tel Aviv urged Thais in Israel, especially those in Jerusalem and near the Gaza strip, to avoid areas in and around the conflict zones.