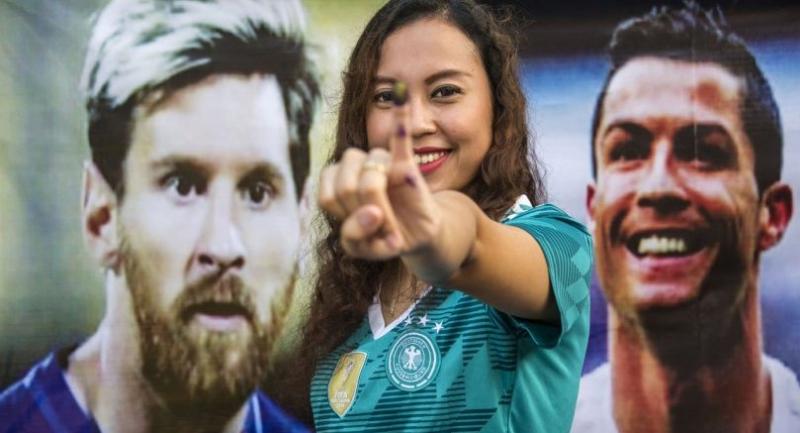 Polling stations were decorated with posters of pin-up football superstar Cristiano Ronaldo and election officials in one location even dressed as ghosts to boost the turnout.

Widodo, known as Jokowi, is popular across the 17,000-island archipelago. But he has struggled to keep his economic growth plans on track, while the growing power of hardline Islamist groups who oppose him could throw up a formidable challenge.

Some 152 million registered voters -- more than half of Indonesia's 260 million-strong population -- were eligible to cast a ballot for 171 mayors, regional leaders and provincial governors.

Some polling station were decked out in a World Cup theme to attract voters -- including posters of the Portuguese footballer and of Argentina's Lionel Messi -- as local staff donned team jerseys and small nets filled with balls were set up around the ballot boxes.

A polling station near a cemetery in the central Javanese city of Semarang took on a "spooky" theme as officials strapped on ghost costumes, local media reported.

Voters in Depok, also on Java, got free fried tofu for their efforts.

Indonesia's three most populous provinces -- West, East and Central Java -- are seen as key battlegrounds in the race, along with North Sumatra.

The way they fall could have implications for 57-year-old Widodo as he gears up for an expected repeat next year of the 2014 contest which saw him beat retired general Prabowo Subianto for the presidency.

Subianto is believed to be planning to run again in the April 2019 presidential election.

"What really matters in Indonesia is perception -- you don't want the president to show himself as having a weak hand," said Yohanes Sulaiman, a political analyst at Universitas Jenderal Achmad Yani.

Authorities tightened security across the archipelago as voting began Wednesday morning. Results are expected by July 9.

Indonesia has been on edge since a series of suicide bombings last month stirred fears about Islamist militancy in the world's biggest Muslim-majority country.

Last week a cleric seen as a top messenger for the Islamic State group in Indonesia was sentenced to death for masterminding a 2016 suicide-and-gun attack in central Jakarta -- raising concerns about retaliatory attacks by his supporters.

The political power of hardline Islamist groups is at unprecedented levels in officially pluralist Indonesia.

That power was highlighted when Jakarta's first  ethnically Chinese and Christian governor -- a key Jokowi ally -- lost his re-election bid last year over blasphemy allegations that later sent him to prison.//AFP