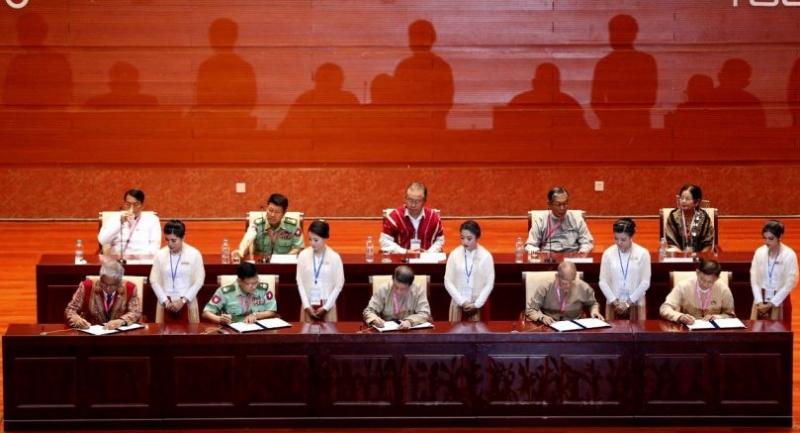 Deligates sign the Union Accord during the closing ceremony of the third session of the 'Union Peace Conference - 21st century Panglong' in Naypyitaw, Myanmar, 16 July 2018.EPA-EFE/HEIN HTET

WHILE THE third round of Myanmar’s Panglong Conference for internal peace made significant progress by the end of the meeting on Monday, trust building among stakeholders will be the determining factor for success, a Thai scholar said.

The meeting last week adopted 14 additional basic principles as the second part of a union accord for peace in Myanmar. A total 51 principles have so far been agreed covering political, economic, social and land rights.

The Panglong conference is an attempt to implement the National Ceasefire Agreement (NCA) signed in 2015 between the authority of the previous administration under Thein Sein and groups of armed ethnicities who for decades took up arms in a struggle for self-determination.

The NCA set a road map to achieve peace step by step: a political dialogue framework, the building of union peace conferences, the signing of a union accord, a constitutional amendment based on the union accord, a multi-party democratic general election and the establishment of a democratic federal union.

They are now at the steps of building the union peace conference – the 21st Century Panglong Conference as it is widely known – and the signing of a union accord, said Thammasat University’s scholar Dulyapak Preecharush.

“Unless there is an accident along the way, Myanmar would be able to establish a democratic federal union after the next general election in 2020,” he told The Nation.

Named after the 1947 Panglong agreement which national founder General Aung San signed with ethnic groups, Myanmar’s de facto leader Aung San Suu Kyi in 2016 carried the spirit of the pact to launch the conference for the first time in this century. The conference was due to be held twice yearly but met only once last year due to differences between the ethnic groups and the government.

The more-than-700 delegates to the conference this year represented 10 NCA signatory groups and seven non-NCA group.

The non-NCA are members of a powerful ethnic alliance of armed groups called the Federal Political Negotiation and Consultation Committee, also known as the Northern Alliance and operating along the border with China.

Some groups in the alliance are still fighting the government.

Trust between the authority and the ethnic groups is the key element for success, Dulyapak said. “While the Tatmadaw [military] is playing the game of war escalation to maintain the status quo, the armed group such as Northern Alliance are using the same game for bargaining power,” he said.

Historical factors are also important, he said. The Tatmadaw, which is sitting at the core of the state building in Myanmar, has prioritised unification, rather than the spirit of a democratic federated union.

However, the academic remained optimistic that peace building in Myanmar has undergone significant advancement compared to the recent past, when it seemed that advancing beyond a ceasefire agreement would be impossible.

“Myanmar is moving from conflict management to political negotiation, and that could eventually develop into a so-called democratic federation union,” Dulyapak said.