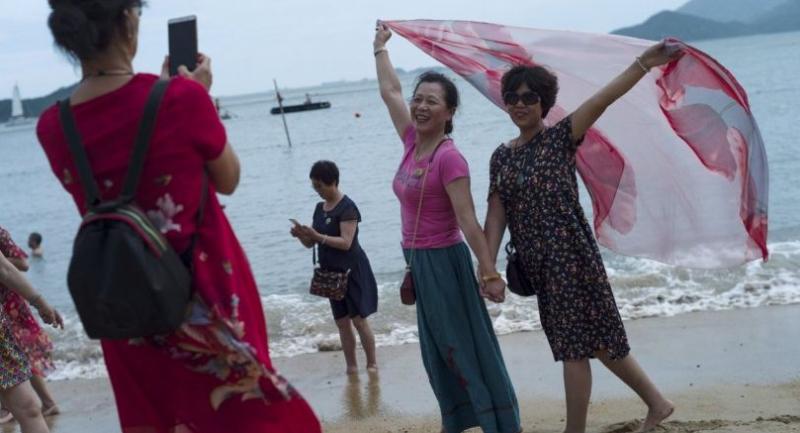 Mainland Chinese tourists pose for photographs on a beach at Repulse Bay in Hong Kong, China on July 16.//EPA-EFE

A VIBRANT economy boosts tourism, strengthens soft power - that zip file-like aphorism, when uncompressed, would unfold a fascinating story of a delicately interlinked travel ecosystem involving China and the rest of the world.

Newly affluent, upwardly mobile Chinese on the mainland are spending big money on their outbound travels for enhanced life experiences. More and more countries are realising Chinese tourists are good for their local economies. According to a June report from the China Tourism Academy, Chinese outbound travellers spent more than US$115 billion outside the mainland, 5 per cent more than in 2016.

Much of that spending was on high-end, customised, memorable trips, confirming their rising purchasing power, evolving tastes and China's consumption upgrade. In the bargain, overseas star hotels and tourist attractions were laughing all the way to the bank. So did domestic airlines and travel agencies, industry insiders said.

The net result of all this wanderlust of millions of better-behaving, high-spending, quality-conscious Chinese is solid goodwill for China. Call it the goodwill economy, if you will, an industry analyst said.

It would not be a misnomer because such goodwill could go a long way in enabling international trade and the creation of new tourism-related infrastructure like airports, new flights, hotels, sightseeing spots and the like, insiders said. This summer, Ctrip, China's largest online travel agency, saw bookings for overseas luxury hotels surge nearly 50 percent year on year, according to its Ctrip Hotel College Data Research Centre.

Ctrip will probably thank travellers such as Du Ni, 29, for that. Du, who works with a bank in Beijing, travels abroad two to three times every year. She loves trips involving rides in self-driven cars and tours where she could get to know a place inside out over a few days. “I prefer customised trips to group tours because I'll have a more flexible schedule and can change it as I like. I'd also have more time to go shopping and find good local restaurants,” Du said.

“Besides, the planning of trip schedules itself is quite interesting. For accommodation, I look for higher-end hotels with stylish decorations, and choose popular places|to eat and explore some local art museums.”

This intense attention to detail has inflated Du's average per-trip spend to 20,000 yuan, almost double the amount she used to spend in the past.

Interestingly, as tourists such as Du increase in number, hotel room prices at many popular overseas destinations edged down this summer, suggesting that life-enriching experiences may be becoming cost-effective gradually, particularly in places like Bali in Indonesia; Kyoto, Osaka, Tokyo and Sapporo in Japan; and in Bangkok and Chiang Mai, which are among the top 10 most popular overseas destinations of Chinese travellers this summer.

“With tourism growing, more new hotels are opening, and the supply of hotel rooms is growing. Besides, hotel prices are tending to become more rational, and the price difference between busy seasons and slack seasons is narrowing,” said Xie Wendan, general manager of the overseas platform of the hotel business unit of Ctrip.