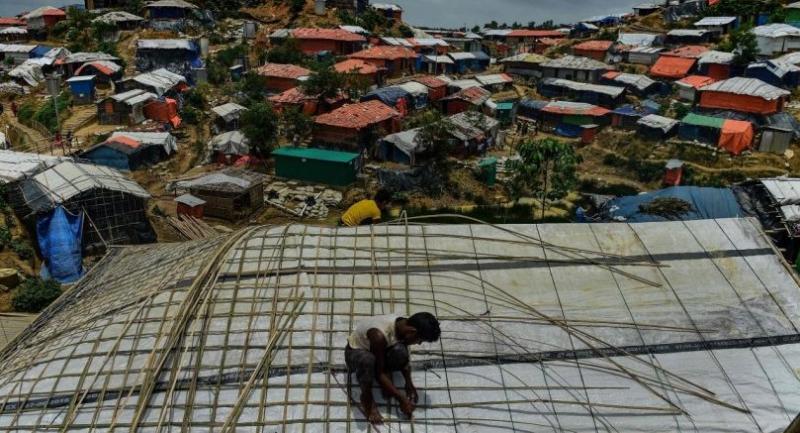 A Rohingya refugee uses bamboo to fix his roof during the monsoon season at Balukhali refugee camp in Ukhia on July 21, 2018.

By SANDY LEEGUMJORN
THE NATION

REFUGEES NOT GOING BACK TO MYANMAR ANY TIME SOON IN THE ABSENCE OF ANY CHANGES IN THE RIGHTS SITUATION THERE, REPORT SAYS

The 68-page report following HRW’s visit to Bangladesh in May pointed out that the camp where the Rohingya are being housed is severely crowded and that the residents face the risk of communicable diseases, fires, community flare-ups as well as domestic and sexual violence.

The HRW also noticed that the refugees were working with construction crews to shore up their meagre homes. No permanent structures can be built in the camp because the Bangladeshi government is insisting it is temporary. Hence, the refugees are being forced to live on steep slopes and jungles.

The report also pointed out that the Bangladeshi government is showing resistance to the schooling of Rohingya children, who are now part of a temporary learning system that does not include teachers.

About 1 million Rohingya Muslims who were forced out of Myanmar now live in southern Bangladesh, with 700,000 of them arriving soon after a crackdown was launched in August last year.

Though many of the refugees have voiced their wish to return home, “Myanmar is not fundamentally reforming itself for these refugees to go home with dignity and safety; therefore, it looks like they are not going to return anytime soon,” HRW’s refugee rights director Bill Frelick said.

“The key principle is the refugees should be able to go back and claim their rights,” he added.

The HRW report suggested that the Bangladeshi government move the refugees to a safer, less crowded and flatter land that is close to the Ukhia sub-district where the mega-camp is located.

However, the authorities should consult and seek consent from the refugees first, the report said.

It pointed out that the Rohingya had been living together for a long time and shared the same experiences, hence they could not be expected to move to a new location separately.

The report also referred to 120,000 refugees living in the nomad land on the Myanmar-Bangladesh border who have no freedom of movement, no livelihoods, no access to basic education or health services and no citizenship status.

“It is the failure of the Myanmar side to believe these refugees will be returning in the future,” HRW’s Asia Division deputy director Phil Robertson said.

“Nothing has changed. There is no guarantee for the people who will return. Why would people want to return to such a place without any security?”

There has been no response from Myanmar even though the report has held the country responsible for crimes against humanity after launching ethnic cleansing action against the Rohingya about a year ago.