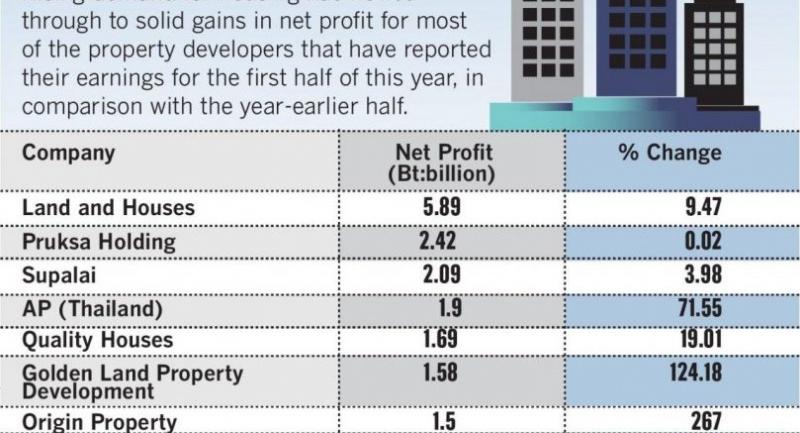 CONFIDENCE is high among listed property companies that strong earnings growth booked by most of them for the first half of the year will be sustained for the rest of the year. Buoyed by the strong growth in the first half of the year, most of the listed property companies plan to launch more residential projects in the second half of this year. Overall, 225 projects topping Bt355.7 billion are planned by listed and non-listed companies for the period, according to a recent survey by The Nation.

They are expected to boost its presales to Bt20 billion and see total revenue reach Bt15 billion at the end of this year.

For the first half, Origin Property reported total revenue of Bt6.65 billion and presales of Bt11.5 billion, jumping 224 per cent and 165 per cent, respectively, from the same period of last year.

Pruksa Holding Plc is even more ambitious, planning to launch 42 residential projects worth Bt41.5 billion in the second half.

The developer aims to boost its total revenue and its presales to achieve the company’s targets after it reported net profit of just Bt2.42 billion in the first half, eking out a rise of only 0.02 per cent from the same period of last year, deputy group chief executive officer Supattra Paopiamsap said recently.

“We are confident that the property market will continued to grow by up to 5 per cent this year,” she said.

The other three projects will be condominiums, to be developed by a joint venture company with its Japanese partner Jisho Residence, a subsidiary of Mitsubishi Estate Group, the company’s chief of corporate strategy and creation Vittakarn Chandavimol said recently.