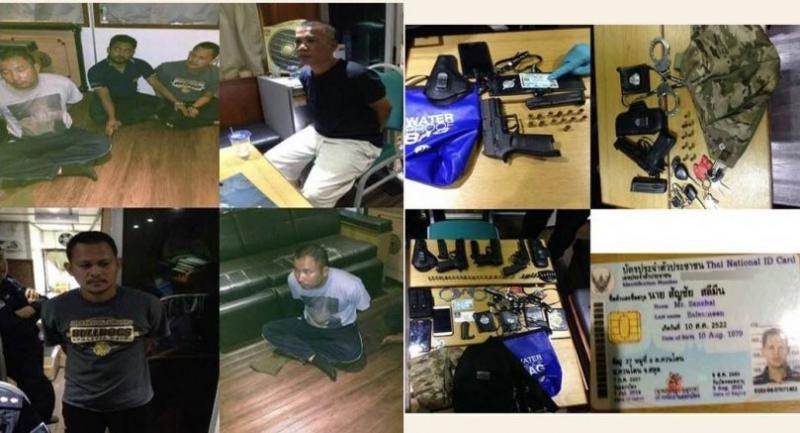 THAILAND and Malaysia offered differing accounts of an incident off Satun province on Sunday, in which four Thais, including three police senior sergeant-majors, were arrested and accused of robbing Malaysian fishing boats.

The four are now being detained in Langkawi, Malaysia.

Pol Lt-General Ronnasin Pusara, a regional police commissioner overseeing the South, said he had learned about the arrest of three Thai police officers and a deputy village headman, though he could not confirm the cause of arrest.

“The three are policemen from Satun. They had their weapons, police identity cards and badges, which have now been confiscated by Malaysia,” he said.

His deputy, Pol Maj-General Supathat Kamdee, had been given the job of holding an urgent meeting with Malaysian officials to find out the facts of the incident and why the four had been arrested, he said.

A meeting was held at Satun’s City Hall yesterday with provincial governor Pattarapon Rattanapichetchai as well as a Consul of Malaysia and several senior Malaysian government officials.

The governor said the meeting went well and a joint team of officials will visit the exact site of the arrests. “The incident may have been caused due to misunderstanding. Our bilateral ties have been excellent over the years,” he said.

Initial reports said the three police officers and the deputy village headman had gone off to investigate reports that unknown fishing vessels were in Thai waters off Satun near Kew Island. During the pursuit, the foreign vessels sailed back into Malaysian waters, and the crew alerted the Malaysian authorities, who then rushed in to arrest the four, Ronnasin said.

However the information released to the media by the Malaysian side was different.

Langkawi police Superintendent Mohammed Iqbal Ibrahim said they had received a distress call from the boat owner at around 8.35am on Sunday.

“The owner said that two of his fishing boats with 11 fishermen had been intercepted and boarded near Pulau Langgun [off eastern Langkawi]. Investigations showed two boats with 12 Thai nationals armed with guns had robbed the fishermen and detained the crew. Seven victims were rescued, while four Thai suspects were apprehended,” Mohammed Iqbal said in a statement on Sunday.

He added that police found three guns that were used during the initial boarding.

The Star reported that efforts to rescue four Malaysians, who were believed to have been taken to Thailand, were underway, as is the hunt for the remaining eight suspects.

Meanwhile, a village headman allegedly involved in the incident has resigned, while police officers, who also reportedly played a part in the incident, have been dismissed pending investigation.