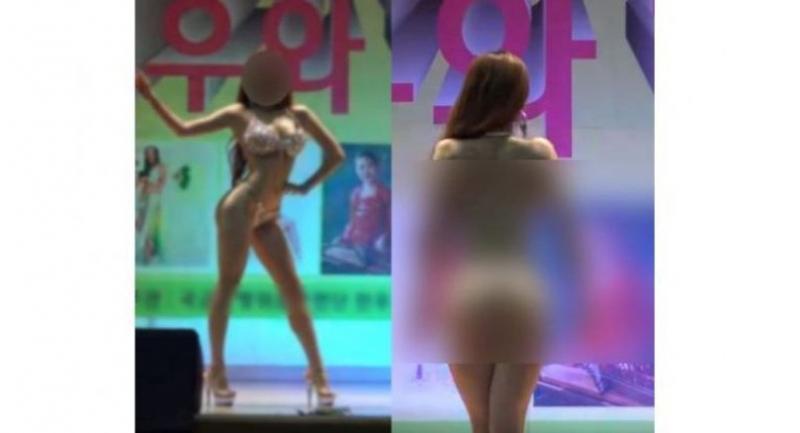 A YouTube video showing a scantily clad woman posing on stage as a part of a “morale-boosting performance” for South Korean soldiers has caused the online furore, leading to the Capital Defense Command to issue an official apology Monday.

The video, uploaded on YouTube on Korea’s Liberation Day on Aug. 15, shows a woman in a small bikini swerving her mostly exposed derriere to K-pop music. Each of her poses is met with thunderous roars from soldiers

“How old are you?” asks the host, to which the woman, introduced as a fitness model working as a gym coach, answers “21.” The audience erupts in excited screams.

As of Monday at 4pm, the video had been watched more than 60,000 times with nearly 800 comments accusing the program of sexually objectifying women.

Opposing comments also noted that a woman’s body is nothing to be censored, and the fitness model must have voluntarily agreed to be in the show in such a context.

By 5pm on Monday, more than 15,000 had signed an online petition filed Friday asking the presidential office to ban future military performances. Another petition in opposition started on the website Monday asked the government to "not be swayed by feminist groups and restore Army to its natural state." The latter had garnered less than 10 signatories.

If an online petition posted on the Cheong Wa Dae website garners more than 200,000 signatures within 30 days, the presidential office is required to issue a formal response.

Following the public uproar, the Army’s Capital Defense Command issued an official apology Monday, saying the controversial performance was put together and hosted by a private organization and the Army had no previous knowledge of the details of the program.

The fitness model’s performance had been merely a part of a package that included traditional Korean music, a magic show and singing, according to the CDC. The CDC vowed to thoroughly check future performances in advance to prevent repetition of a similar incident.