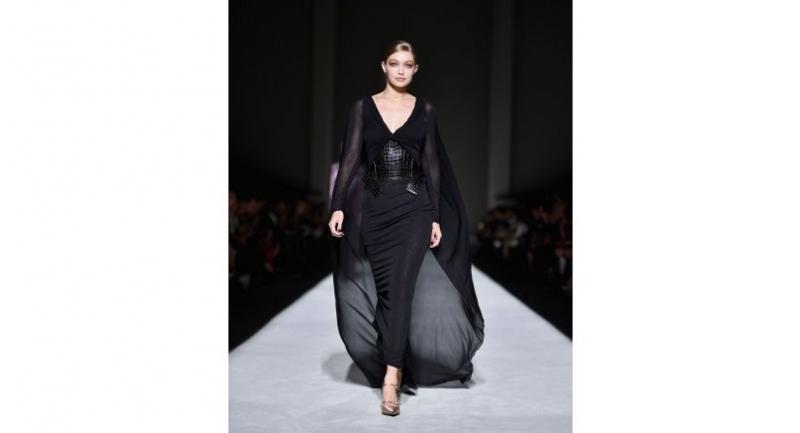 The US city kicks off a month-long fashion merry-go-round in which editors, celebrities and influencers descend first on the Big Apple before jetting off to fashion weeks in London, Milan and Paris.

For men, the trademark Tom Ford suit was fashioned into candy colours and metallics, paired with block shades and a traditional mac.

Hemlines fell below the knee with delicate lace detailing, and there was double-breasted black pant suit for evening that wouldn’t look out of place on Meghan Markle, the newly minted Duchess of Sussex.

Kate Spade put the sparkle into the event the following day, paying tribute in a riot of colour to the handbag brand’s founder, three months after her tragic death.

It was the label’s first runway show at the bi-annual style fest, having previously opted for Instagram-able presentations, held this time in the lofty surrounds of the iconic New York Public Library.

The new creative director, Northern Ireland-born Nicola Glass, was already working on her debut collection when 55-year-old Spade, who founded the company with her husband, committed suicide in June.

Silver glitter ran down the centre of the pale pink-carpeted runway, a nod to the woman whose brand has been synonymous with a joyful outlook on life since its founding in 1993.

Kate Spade’s spring/summer 2019 is one of pale lilac, hot pink, dark green, chartreuse, florals and print, with block-heeled sandals and knee-high boots, and liberal use of the spade symbol.

“It feels more modern, less retro, there’s more polished ease to it and prints, they’ve been evolved in a way where they’re a little bit more graphic with unexpected details,” Glass said.

Besides the silk dresses, cropped pants, checked suiting and buttoned mini-skirts, they sported purses, sunglasses and silk headscarves knotted at the nape of the neck.

Spade sold her last shares in her namesake brand in the mid-2000s. The company is now owned by Tapestry, but Glass hailed Spade as a role model woman, entrepreneur and designer.

There were tributes too to Ralph Lauren whose models sashayed through the oriental rug-lined Bethesda Terrace fountain in Central Park, before a frail looking Lauren, dressed in jeans, dress shirt and black tux, came out to a standing ovation, doing a lap of honour and tenderly embraced by his guests, among them Oprah Winfrey, Anne Hathaway, Jessica Chastain, Blake Lively, Pierce Brosnan, Kanye West and Priyanka Chopra, as well as Donna Karan, Michael Kors and Carolina Herrera were in attendance.

Dozens of models ranging from almost babes in arms to grey-haired men, encapsulated 50 years in which the 78-year-old has literally dressed America – his Ralph Lauren and Polo labels a one-stop shop for evening, day, business and sportswear.

The American founder of the global lifestyle brand Tory Burch was upbeat and happy, unveiling a collection, imbued with the memory of her wealthy parents and their Mediterranean cruises.

The clothes were inspired by their steamer-hopping trips from Italy to Greece, and from Spain to Morocco, full of contrast from Cyprus lace to North African djellabas, and from flamenco flounces to safari suits.

Escada celebrated its 40th anniversary by making a New York Fashion Week debut with soft power dressing for the working woman – an upbeat and colourful collection that paid tribute to the 1980s.

Models strode down a serpentine grass runway for the Munich-based luxury brand’s first runway show since 2015 and the second full collection of young Irish designer Niall Sloan, who joined Escada last year and who earlier in his career spent a decade at Burberry.

The show featured power suits with big gold buttons and gold chain belts, yellow jackets, fuschia skirts, oversized silk shirts black dresses covered in bright florals, and contrast in the form of beige and cream, with plenty of stripes and dots – an homage to Julia Roberts in “Pretty Woman” with a reinvention of the brown dress with white polka dots she wore to the races in the movie.

As befits the best of any anniversary, it looked back as well as forward. Sloan said Ley was a constant inspiration and that her collections were “always done with a touch of lightness.”

More celebrations were in store at Longchamp, which made its New York debut to mark 70 years in the business.

Fronted by new brand ambassador Kendall Jenner, guests were invited to the World Trade Centre, where the Manhattan skyline provided a dazzling backdrop to a collection summed up as 1970s glamour, California spirit and Parisian elegance.

The French staple, best known by millions around the world for the iconic Pliage bag, is building on its leather goods heritage by highlighting its ready-to-wear, sunglasses and footwear lines.

Jenner sat front row, sporting the Longchamp Gladiators on her slender pins, next to Kate Moss, who was the face of Longchamp for eight years and in turn sat next to Indian actress Priyanka Chopra.

There were lots of fringed tops, shorts and mini-skirts in suede, gladiator sandals, and Ikat-style prints on long skirts and dresses.

“Twenty-five years ago, fashion and leather goods were separate sectors,” Cassegrain said. “The bag is now a fashion item, and labels also have to be fashion labels.”

Nixon, whose effort to oust two-term incumbent Andrew Cuomo will do or die in Thursday’s Democratic primary, sat in the front row.

Each guest was given a Vote for Cynthia leaflet, there were special thanks to her in the notes for “all you are doing for New York” and Siriano came out for a bow at the end in a Nixon T-shirt.