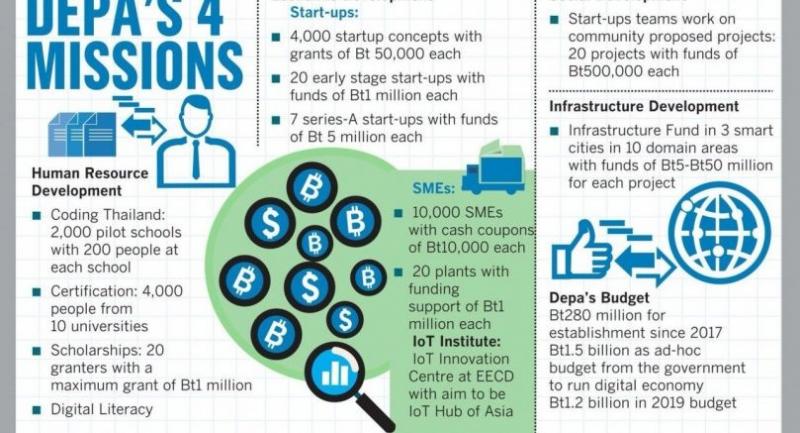 By Asina Pornwasin
The Weekend Nation

DEPA aims to make the kingdom an IOT hub of asia, boost digitalisation of Asean bloc

AIMING to successfully lead Thailand into a digital economy, the Digital Economy Promotion Agency has set ambitious goals, including the country emerging as the Internet of Things (IoT) hub of Asia within five years, and the agency itself taking the lead in helping Asean countries join the digital economy.

Nuttapon Nimmanphatcharin, president and CEO of Digital Economy Promotion Agency (Depa), said their goal is to be the leader in driving Thailand’s digital economic development and emerging as the IoT hub of Asia.

Depa was established in 2017 with a Bt280-million budget, along with an ad-hoc budget of Bt1.5 billion to drive the digital economy under the government’s Thailand 4.0 strategic plan. Its 2019 budget will also get an infusion of Bt1.2 billion to oversee the World Expo and to run the agency’s routine projects.

“Each initiative and project that Depa funds [is chosen] to stimulate digital economic development in the ecosystem,” explained Nuttapon. “We do not just invest money, we also join in the development, give advice and assistance and create and expand the market.”

Driving development of the digital economy first requires digital human resources, Nuttapon said, and Depa aims to help nurture the digital talents of up to 100,000 people within four years. To achieve the goal, it has initiated four schemes – Coding Thailand, technology certification, scholarships and digital literacy.

Coding Thailand is a collaboration between Depa and tech giants including Microsoft, Google, and Cisco to develop coding curriculum and encourage Thais to learn coding at codingthailand.org. Depa has joined hands with 2,000 pilot schools nationwide to encourage around 200 students at each school to learn coding with the aim of 400,000 students learning the future-oriented digital language.

Depa has also joined hands with tech giants and universities to encourage students to get certified in special areas of technology, such as cloud computing and artificial intelligence. It aims to certify 4,000 students from 10 universities.

Moreover, Depa will offer scholarship for multidisciplinary mechatronics engineering innovators working on projects that address the painful points of businesses.

Last, but not least, is nationwide digital literacy training.

The agency will work with tech firms, including Google and local startups, to establish a self-learning platform so people can increase their digital literacy on their own, anywhere and at any time.

Economic development is a crucial part of Depa’s mission to develop a digital economy. The agency will support startups and other businesses, especially small and medium enterprises (SME) and factories.

Depa’s support for startups will begin at the startup idea stage, continue through the vulnerable early-stage and then on to the growth stage, Nuttapon said. Seed money of Bt50,000 will be spread among startup proposals, with the goal of seeding 4,000 ideas.

Depa has invited venture capitalists and corporate capital ventures to sit as judges for startup pitches. Solid startup proposals will receive Bt1 million from Depa – Bt300,000 as a grant and Bt700,000 as investment. Depa will in turn take 25 per cent of the Bt700,000 in shares.

The main evaluation criteria at this stage are innovation, scalability and repeatability. Depa aims to invest in 20 early-stage startups, and has done so with five so far.

Growth-stage startups are also in Depa’s support plan. The agency will inject Bt5 million in startups whose pitches succeed in meeting those same three criteria, and will hold 50-per-cent of the shares. It has so far invested in two growth-stage startups and plans to invest in another five.

“We are not only giving them money, but will also accelerate them and connect them to the world market through collaboration between Depa, government and the private sector in each country,” Nuttapon said. He cited examples of Tripple i in Taiwan, Trust Holdings in China, TechStar in Singapore, CyberPort in Hong Kong, as well as Cisco in the United States and Israel.

In addition to helping startups, Depa has also focused on helping the real sector (the manufacturing and industrial economy but not services), both SMEs and manufacturers. It plans to help 1,000 SMEs through digital transformation with the help of startups in Depa’s list and with a grant of Bt10,000 each.

Meanwhile, larger manufacturers will get a Bt1-million grant to help with their digital transformations that draw on the solutions of startups.

Last but not least, it is to help attain Thailand emergence as the IoT hub of Asia over the next five years. Nuttapon said, after setting up an IoT institute, Depa plans to spearhead an IoT Innovation Centre, to be located in Digital Park Thailand in the Eastern Economic Corridor of Innovation (EECD). That centre would include facilities for research and development across the new “S-curve” industries such as IoT, artificial intelligence (AI), virtual reality (VR), data analytics and mathematics. It will also offer the IoT testing standard and provide space for developing prototypes.

“It will be the turning point of digital economy development for the country,” Nuttapon predicts. “It will enhance the power of digital services and hardware makers by adding in the value of the design stage in order to create new products and service.”

Depa will provide budgets ranging from Bt5 million to Bt50 million for each social infrastructure project. The initial focus will be on projects in three smart cities – Chon Buri, Rayong and Chachoengsao. Potential projects could include smart mobility, smart port, smart living, smart farming and smart environment. Funding could be paid back to Depa within three years or 49 per cent of shares could be transferred to the agency.

“Our role in promoting the digital economy is to be a co-creator, co-investor and co-partner with our stakeholders, including people, businesses, communities and society. We play the role of facilitator and ‘angel investor’ for them,” Nattapon summed up.