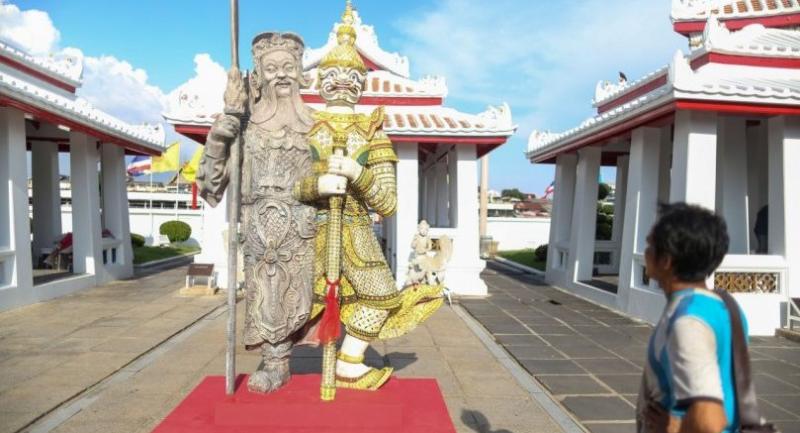 From comments on sex workers to those who toil in the fashion industry and polka-dotted pumpkin balloons, the Bangkok Art Biennale has something for everyone

THE CREATIVE skills of 75 international and local will be bringing a special shine to the city this season as the inaugural Bangkok Art Biennale (BAB), which kicked off yesterday, swings into gear. More than 200 art pieces can be admired at 20 venues ranging from riverside temples, historical buildings to malls, hotels and galleries over the next three-and-a-half months.

Continuing until February 3, both big names and emerging artists explore diverse platforms on the festival’s theme “Beyond Bliss” – a paradox to the world we live in. Here are just some of the works awaiting a visit from art enthusiasts. Suspended from the atrium’s ceiling at CentralWorld are 14 giant red-and-white polka-dotted pumpkin balloons by Yayoi Kusama – the eccentric grande dame of optical illusions. It’s the same collection that was displayed last year at Ginza Six complex in Tokyo. At nearby Siam Paragon, her admirers can share in her hallucination with dots, pumpkins and meshes of netting through two fibreglass sculptures “I Carry On Living with the Pumpkins”. Celebrated South Korean artist Choi Jeong Hwa brings in his best-known inflatable sculptures and site-specific installations fashioned from mass-produced products that are playful yet satirical. His gigantic black inflatable robot that keeps falling down despite trying to get up is on view at Central Embassy in a criticism of the powerlessness of men in this frustrating world. The inflatable porker “Love Me Pig I” by Choi Jeong Hwa is on display at Siam Center. /Courtesy of Siam Center

His large inflatable metallic pink pig with moving wings at Siam Center would really like to fly but never gets off the ground. Meanwhile, at the Bangkok and Culture Centre (BACC), Jeong Hwa creates a plastic jungle fashioned from the suspended vines of more than 10,000 colourful plastic baskets and invites visitors to walk through vessels that sway as they are passed in a comment on mass-consumerism. Marina Abramovic invites visitors to participate in some long durational activities such as counting rice grains at BACC. /Courtesy of Marina Abramovic

Like her 2015 audience-participation project in Sydney, veteran performing artist Marina Abramovic invites visitors to participate in some long durational activities such as counting rice grains to examine the limits of the body, the possibilities of the mind and the being of the present time.

There are some protocols to follow before joining the activities at BACC until November 11. All electronic devices and belongings must be stored in lockers and Abramovic’s assistants – they’re referred to as facilitators – will direct a series of preparatory exercises that need to be undertaken before proceeding, such as breathing and blocking and physical squats. Noise-cancelling headphones must be worn at all times and no one is allowed to speak. The facilitators will lead participants to join activities in each section from counting rice, sitting on a chair and gazing at coloured rectangular sheets of paper hung on a wall, standing in silence on a raised wooden base, or sleeping on camp beds. Visitors can choose which activities they want to join and how long they want to take.

Inspired by Abramovic’s performing method, the Marina Abramovic Institute (MAI) – a multidisciplinary collaboration of artists for long durational works – is bringing eight artists from different countries, each of whom presents a daily eight-hour performance over the three-week period on the theme “A Possible Island?” Visitors are encouraged to take off their shoes and navigate their way through the cocoon-like tunnels made from adhesive tape by the Croatian Design Collaborative Numen For Use. /Nation:Tanachai Pramarnpanich

BACC is BAB’s main venue with 25 international and Thai artists showing here. The Croatian Design Collaborative Numen For Use brings in their famous cocoon-like tunnels made by wrapping tendons of translucent multi-layered adhesive tape then suspending them between the floor and ceiling. Visitors are encouraged to take off their shoes and navigate their way through the web of tunnels and hollows.

“When you go inside, you may feel insecure at the beginning about crawling, walking or sliding along the translucent tunnels with an amorphous surface. But it allows a space for you to become your own self – away from the outside world. Though it can hold the weight of about 20 persons, I suggest having only three individuals at a time inside the tunnel so that each person will have a space large enough for self-awareness,” says a member. Imhathai Suwatthanasilp presents her crocheted works and a light box with thousands of moth wings to comment on sex workers. /Nation: Prasert Thepsri

For more than a decade, Thai artist Imhathai Suwatthanasilp has been painstakingly crocheting strands of her hair into outlandish mixed-media artworks, in what she calls a commemoration of her origins and significant episodes in her life.

Working with the Empower Foundation – an NGO that assists and educates sex workers in Chiang Mai –she displays 174 pieces of a sewing machine’s parts in a glass cabinet - each of them crocheted with the hair of the sex workers. On the wall, she has another light box to which thousands of moth wings have been glued with the message “Good Girls Go to Heaven, Bad Girls Go Everywhere”.

“All the parts come from one sewing machine donated to the foundation. I took them apart, crocheted them with hair and rearranged them in a glass cabinet according to the diagram of the sewing machine. I wonder why so many people donate sewing machines to these workers for their alternative jobs. The fallen wings of flying moths I collected overnight represent fragility – just like the sex workers who couldn’t hold on this career for life,” says Imhathai. Kawita Vatanajyankur uses her body to represent a weaving shuttle in a reflection on female workers in the fashion industry. /Nation:Tanachai Pramarnpanich

Kawita Vatanajyankur will again use her body as the art object for her performing and video art to speak about inequality, feminism and women’s rights. For her “Dye” series, a loom-like structure with warp yarns is set up, and Kawita, who transforms herself into a shuttle tool, will attach herself to the weft yarn and constantly move back and forth between the yarn threads in order to weave a textile during the course of a 45-mintue performance.

In her performing video also showing in this space, Kawita taking the roles of a spinning wheel producing threads, and a skein of fibres with her body suspended above a bowl of brilliant red dye to dye the white wool attached to her head red.

“My latest series talks about the female labourers in the fashion industry. About 80 per cent of employees in weaving factories are women who are little celebrated and perceived like machines. I have therefore chosen to present myself as a tool that is lifeless and works repetitively according to the production process,” says Kawita who previously turned herself into a broom, suspending and sweeping her hair across floor until its touched the dustpan to question the social ideologies related to the repetitive tasks of a woman’s mundane labour. Opposite the East Asiatic Building and in front of the Mandarin Oriental Hotel is a giant fibreglass bull terrier coated in gold leaf. This is part of French artist Aurele Ricard’s “LostDog” series, inspired by posters of lost dogs in New York and metaphorically representing the displaced state of human beings in the confusion of the modern world. Inspired by the Sino-Siamese architectural and sculptural elements of Wat Arun, which underwent major refurbishment during the reigns of Kings Rama II and III, and the legend of Siamese twins Chang and Eng who were born and lived in that period, Thai artist Komkrit Tepthian creates a three-metre-tall, fibreglass conjoined twin figure “Giant Twins” consisting of a stone Chinese warrior and a white guardian giant statue modelled after the statues situated at the temple. Adjacent is a stone-like sculpture of a garuda – a mythological half-bird and half-human creature – modelled after the stone ones of the temple but with a torso painted red and in a different style from the originals.

“The original garuda stone sculptures were created by Chinese artisans and shipped to Siam. With the differences in cultural belief, these garuda figures have torsos that are more female than male according to the typical Thai style. For my work, I replaced the Chinese-style female torso with that of Thai-style male,” says Komkrit.

He will also install a gachapon – a vending machine – dispensing capsule toys with random playouts of tiny resin models.

“I will make about 100 resin models created after the sculptures and statues found in the temple. In each capsule, I will also provide a location and a detail of the sculpture/statue-inspired model in Thai, Chinese and Mandarin,” adds the artist who is known for his sculptures made out of Lego bricks.

On the opposite side of the river, celebrated Chinese-French artist Huang Yong Ping installs his two large fantastic creatures at the door of Wat Pho’s Sala Masikawan whose murals depict Chinese tales. Acting like the gatekeepers, the creatures have man-like legs but goat heads with scrolls in their mounts.

“My work incorporates the mystery of gods and the philosophy of Taoism but I would like viewers to feel free to interpret my works as they see them,” says the artist who three years ago put his large-scale sculptures on show at BACC including his 2002 masterpiece “Nightmare of King George V” featuring an elephant mounted by an attacking tiger to comment on imperialism and the hunting safaris of bygone colonial days.

MAKE A DATE WITH IDEAS

Bangkok Art Biennale 2018 continues until February 3 at 20 sites around Bangkok.

Find out more at www.BKKArtBiennale.com or download the application “BAB 2018”.