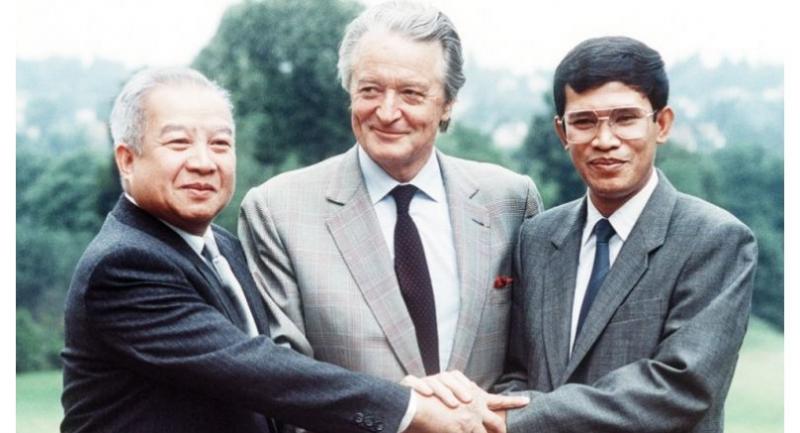 As the Kingdom prepares to commemorate on October 23 the 27th anniversary of the signing of the 1991 Paris Peace Accords, which ushered in an end to nearly two decades of civil war, there is political conflict on whether the tenets of the agreement are still being adhered to.

Ruling Cambodian People’s Party spokesman Sok Eysan said on Wednesday that the Accords were being “enforced perfectly” despite “facing many difficulties”.

However, former opposition lawmaker Ou Chanrath dismissed this, saying the government “does not respect” the agreement.

The agreement was recognised by the UN and diplomats from 18 countries. It returned peace to Cambodia via the enforcement of a cease-fire, disarming of opposing factions and the arrangement of free and fair elections.

It also called for the preservation of the Kingdom’s sovereignty, independence and territorial integrity, as well as the inviolability of its neutrality and unity.

Enshrined in the agreement was also respect for and observance of human rights and fundamental freedoms in Cambodia.

Eysan hailed the Accords for leading to the 1993 elections supervised by the UN Transitional Authority in Cambodia (UNTAC). The first Cambodian government was created and UNTAC forces withdrew from Cambodia.

He pointed out that the intrinsic aspects of the agreement have been merged into the 1993 Cambodian Constitution. This included the guarantee of a multi-party democracy headed by a constitutional monarchy, a government established through free and fair elections, and the separation of the legislative, executive and judiciary.

It also ensures Cambodia’s compliance with the UN Charter and the International Covenant on Human Rights, Rights of the Child and Women’s Rights, he said.

“Over the past 27 years, the Accords have been enforced perfectly, despite facing many problems. Cambodia has [faced moves] against democracy and the rule of law, which have to be prevented, as in 1997, 2013 and 2017,” he said.

“Despite many difficulties, the potential and longevity of the Paris Peace Accords have been ensured for the future.”

In 1997, troops loyal to the CPP clashed with those supporting the royalist Funcinpec party. This led to the removal of Prince Norodom Ranariddh from his position as first prime minister.

From 2013 to last year, the opposition increased its share of the National Assembly to eventually 55 seats.

He referred to sovereignty and territorial integrity, using the treaty Cambodia signed with Vietnam in 2005 as an example.

In that year, the National Assembly signed a contentious border treaty with its neighbour that saw opposition party members walk out in protest before the final vote.

“[Such actions] affect the agreement and shows the [Cambodian government] does not respect it."

“Another important thing is the democratisation process. We can see that Cambodia has stepped off the democratic path and moved backwards because of the CNRP’s dissolution.”

Analyst Lao Mong Hay agreed that some important points stated in the Accords have not been implemented.

“The Paris Peace Accords’ clauses on democracy with pluralism, the respect for and observance of human rights, and on judicial independence have not been implemented."

“These clauses are crucial to ensuring the welfare of the long-suffering Cambodian people,” he told The Post on Wednesday.