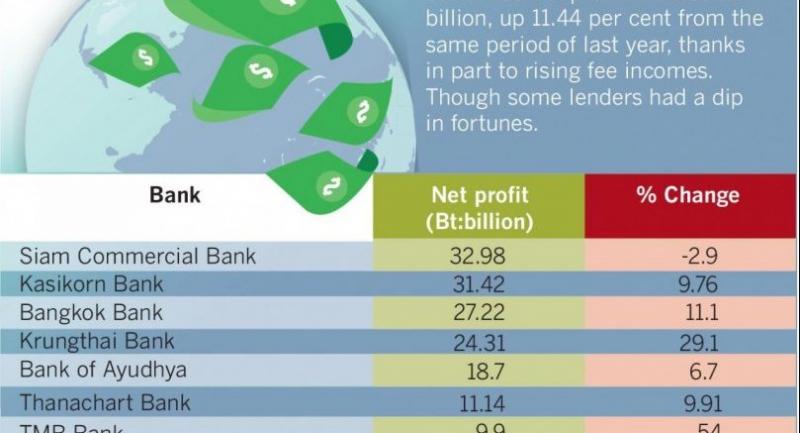 Eight of the 10 announced single and double-digit growth respectively, led by the 54-percent surge of TMB Bank to Bt9.9 billion net profit for the first three quarters.

Krungthai Bank came second with a net profit of Bt24.31 billion, up 29.1 per cent year on year.

TMB Bank’s chief executive officer, Piti Tantakasem,said the bank recorded a Bt12billion gain from the sale of 65 per cent of its subsidiary TMB Asset Management Co Ltd (TMBAM) to Eastspring Investment (Singapore). It benefited from the change in status to being a 35-percent associate company of TMBAM. With higher pre-provision operating profit, the bank also increased its provision in preparation for IFRS 9 and asset quality management. Coverage ratio, as a result, increased to 157 per cent from 143 per cent as of December 2017.

Siam Commercial Bank (SCB) recorded Bt32.98 in net profit for the period, down 2.9 per cent from last year, despite it being much higher than most of the others. (see graphic).

The bank’s president and chief executive officer, Arthid Nanthawithaya, explained the fall in net profit to the bank’s huge investment in its Transformation Programme, which he said had hiked the bank’s operating expenditure. Total operating expenses in the third quarter went up 13.6 per cent year on year, driven by the implementation of its transformation projects, investments in new technology platforms and acquisitions, he added.

Kittiphun Anutarasoti, president and chief executive officer of CIMB Thai Bank Plc, said the bank recorded a consolidated net profit of Bt537.4 million, down Bt 17 million or 3.1 per cent year on year, due to higher operation expenses and lower income from service fees.

Bank of Ayudhya Plc president and chief executive officer Noriaki Goto estimated the bank’s growth this year at 810 per cent.

Barring an escalation in trade protectionism and its potential impacts, the Thai economy is expected to sustain its growth momentum, supported by the strengthening global economy, larger government spending and investment, a more pronounced recovery in private investment and improvement of the overall income conditions, he said.

Noriaki is optimistic of reaching the bank’s full-year growth target, given sustained improvements in the business environment and the seasonal rise in both retail and commercial lending in the fourth quarter.