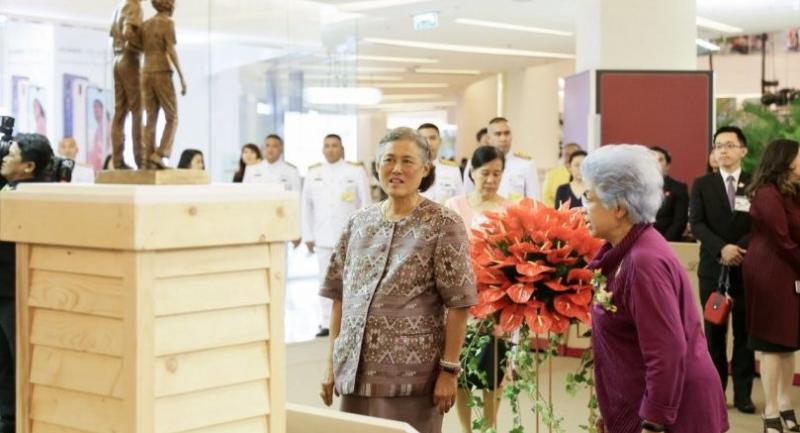 The exhibition, which has as its theme “Love and Fondness” is being organised by Siam Piwat, the Mae Fah Luang Foundation under Royal Patronage and Thai Beverage, and runs until October 28 at the Lifestyle Hall on the second floor of Siam Paragon.

Thanpuying Butree Veeravaitaya, the Foundation’s Secretary-General said: “More than 23 years after her death, the graciousness, love and caring of the late Princess Mother remain imprinted on our memories. The late Princess Mother witnessed many changes in Thai society throughout the five kingdoms since the reign of King Chulalongkorn until the reign of His Majesty King Bhumibol Adulyadej. Throughout her lifetime, she gave love to everyone and her royal works continuously helped solve problems for everyone, no matter their nationality or religious beliefs.”

This year's exhibition aims to encourage the young generation to follow the Princess Mother as a role model and is divided into several chapters of her life.

Chapter 1: Dekying Sangwan grew up in a family goldsmiths in the small community of Wat Anongkharam and became a royal servant to Princess Valaya Alongkorn, the Princess of Petchaburi, daughter of King Chulalongkorn (Rama V) and Queen Savang Vadhana. Sangwan later enrolled as a student of Siriraj School for Midwifery and Nursing.

Chapter 3 Princess Sri Sangwan: Following the death of Prince Mahidol Adulyadej, the princess assumed the responsibility of head of family raising two sons and one daughter in a changing society.

Chapter 4 Princess Mother Sri Sangwan: the Princess Mother continued to take care of and train her sons and daughters – Princess Galyani Vadhana, the Princess of Naradhiwas Rajanagarindra, King Ananda Mahidol (King Rama VIII, and King Bhumibol Adulyadej (King Rama IX) and later passed this great love to her grandchildren, instilling in them a sense of morality and responsibility.

Chapter 5 Princess Mother Somdet Phra Srinagarindra Boromrajajonani not only graciously took care of her family members, but was also full of mercy and kindness to Thai citizens. She is the “Somdet Ya” beloved to all Thai people.

Chapter 6 Mae Fah Luang: The Princess worked hard to support the hilltribes through the setting up of the Mae Fah Luang Foundation and Doi Tung Development Project. Her mission was to solve the poverty problem, leverage incomes and raise the quality of life of the people. She became known as “Mae Fah Luang”, bringing happiness and hope to the hilltribe people in the remote areas in Kingdom.

The event will also distribute quality products under the Doi Tung brand produced by members of the Doi Tung Development Project in Chiang Rai Province. These include handicrafts of Doi Tung Lifestyle and coffee under Doi Tung Caf้ as well as seedling from the Mae Fah Luang Garden at Doi Tung, Chiang Rai province.

Shoppers can also follow Somdet Ya’s footprints by learning how to make a terrarium, creating green area around and create a beautiful bookmark from a dried flower.