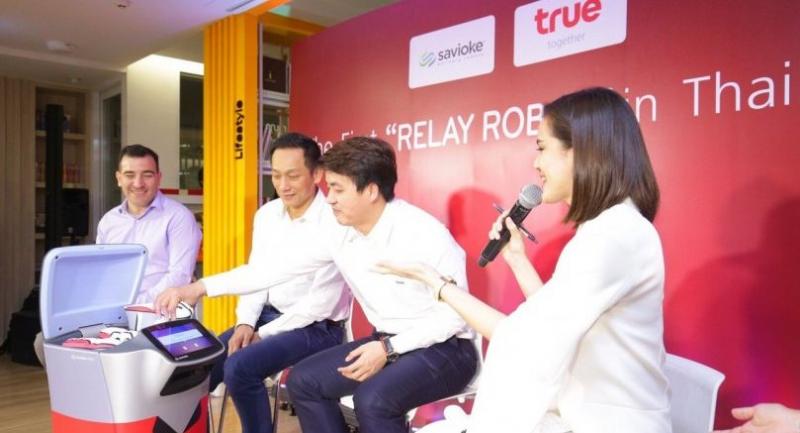 Songtham Phianattanawit, second from left, managing director of IoT business at True Corporation, is with executives showing off the Relay robot during a presentation on the device’s capabilities for delivery services.

TRUE Corporation has entered into the robotics market with the release of what it says is the first autonomous delivery robot in Thailand.

The company expects to distribute 50 of the robots, called Relay, within the next three years. It also plans to bring out in-house robotics for the Thai market next year.

Songtham Phianattanawit, managing director of IoT business at True Corporation, said that the robotics industry in Thailand is an emerging market. The firm has joined with Savioke, which developed the autonomous robot, and is the sole distributor in Thailand.

The firm in the first step is providing the Relay robot, which is targeted at operators requiring delivery services in sectors such as hotels, premium condominiums, service apartments, high-rise buildings, hospitals, logistics, and manufacturing with assembly line operations.

The Relay robot is 90 cm high, 60 cm wide and 40 kg in weight. It moves smoothly in indoor environments and has a working time of around fours hours before its battery runs out.

“I think that the robotics business will help us expand our Internet of things (IoT) solutions to the market. We have around 10 IoT solutions available in the market such as for smart city, smart logistics and smart services solutions to support the market nationwide,” said Songtham.

He said that the firm will provide robots in the market for sale and rent. The robot will be priced around Bt1 million per unit.

He said that the firm by the end of this year expects to generate revenue from its business unit of around Bt1 billion. Of the 50 or so robots that the company expects to distribute over the next three years in Thailand, around 90 per cent of them will be rented out. The firm is also interested in investing in Savioke at a later stage.

Matthew Festo, senior director, partnerships and sales for US-based Savioke, said Thailand is the second country in Southeast Asia, after Singapore, where it is providing its robots.

Teerapon Tanomsakyut, chief innovation and sustainability officer at True Corporation, said that the firm began developing in-house robots three years ago and has invested more than Bt20 million into the project. It plans to come out with a new robot for the Thai market next year.