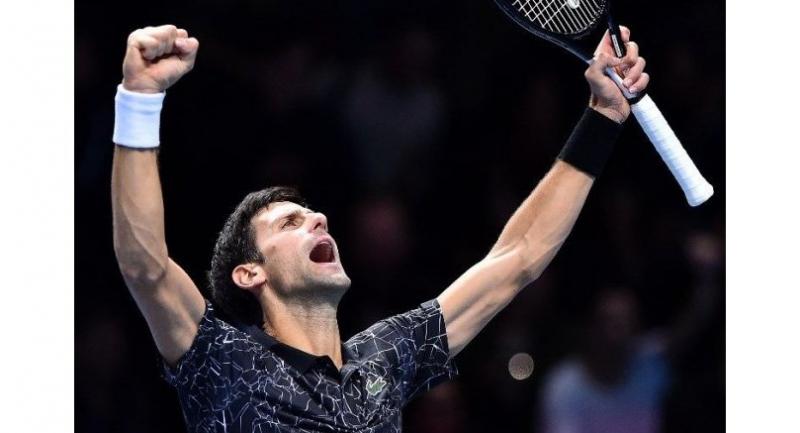 Serbia's Novak Djokovic celebrates after winning against US player John Isner during their men's singles round-robin match on day two of the ATP World Tour Finals.

Novak Djokovic launched his bid for a record-equalling sixth ATP Finals title by brushing aside John Isner in straight sets on Monday after Alexander Zverev made it six consecutive wins against Marin Cilic.

The Serbian world number one looked in ominous form at the O2 Arena as he looks to finish his season with a flourish, winning 6-4, 6-3 in a focused and disciplined display.

In stark contrast to second seed Roger Federer, who produced an error-strewn performance in defeat to Kei Nishikori on Sunday, Djokovic hit just six unforced errors and won 86 percent of points on his serve.

He broke the giant Isner in the fifth game of the first set to establish a stranglehold on the match and never looked like allowing the American back into the contest, breaking twice more in the second set to win in 73 minutes.

"The match was great, obviously," said Djokovic. "I had three breaks of serve of John which is sometimes 'mission impossible' but I managed to be at the right place at the right time.

"I held serve well, I backed it up from the baseline, I played very solid and didn't give him many opportunities."

In a contest packed with unforced errors, the 21-year-old third seed recovered from a break down in each set to establish an early foothold in the Guga Kuerten group.

The 30-year-old Cilic, who has a reputation for faltering when under intense pressure, broke first but Zverev hit back as he served for the set at 5-3, going on to edge the tie-break.

In the second set, Cilic again drew first blood, breaking Zverev in the seventh game to establish a 4-3 lead but the German responded immediately to level at 4-4.

Cilic, seeded fifth in London, dug deep to save match point when trailing 4-5 but the set went to another tie-break, which Zverev dominated, winning 7/1 to seal the match.

There were a total of 78 unforced errors in the contest -- with Cilic hitting 46 of those -- as both players struggled to adapt to the court conditions.

"The court is difficult," said Zverev. "The court is very fast. And it's very high-bouncing as well. So, it's more difficult than in other tournaments, so everybody has to kind of find their rhythm in the first match.

"But at the end of the day it was a pretty good match. I'm happy to get the win. That's the most important thing. It's important -- this tournament is big. It is very important to all of us players."

Zverev has long been talked about as one of the brightest talents of his generation and will be keen to make a statement in London after again flattering to deceive at Grand Slam level this season.

Federer lost to Nishikori in straight sets in the Lleyton Hewitt group on Sunday, leaving him in grave danger of failing to qualify for the semi-finals for only the second time in his career.

The ATP Finals are contested by the eight players who have accumulated the most ranking points over the season and is in a round-robin format, with the best four players reaching the knockout semi-finals stage.