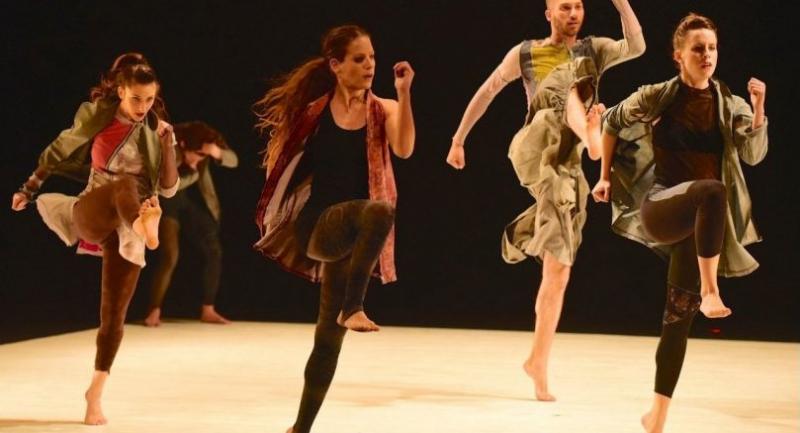 Performed by the entire company, “On the Edge” was created to commemorate Kolben Dance’s 20th anniversary

THE COOPERATION between the Embassy of Israel in Thailand, Friends of the Arts Foundation’s International Dance Festival (IDF), now in its 18th edition, and Bangkok Art and Culture Centre’s (BACC) Performative Art Festival, now in its seventh incarnation, has resulted in many memorable performances over the years. So it comes as little surprise that the IDF has chosen to open with Jerusalem-based Kolben Dance Company’s “On the Edge”. Performed by the entire company, “On the Edge” was created to commemorate Kolben Dance’s 20th anniversary

Based on the experience of living in Jerusalem, the city of peace which ironically has never had one peaceful moment in its entire history, “On the Edge” is described as “a poetic and energetic journey that brings the audience closer, literally and metaphorically, to an embracing and kicking dance experience”. Even before the start of the performance, the dancers put the audience and themselves “on the edge” with their direct interactions.

At another moment, dancers, coming from different countries and with diverse dance and movement backgrounds, talk to the audience in their mother tongues.

“On the Edge” promises to be an occasion where we make endless attempts to reach out to the other, an anonymous other, who stands on the other side of the abyss that separates us. It is a tireless effort that gives hope for the victory of real, warm human desire.

Amir Kolben, dean of the Dance Faculty at the Jerusalem Academy of Music and Dance and founder of Kolben Dance Company, explains why this work is making its Southeast Asia premiere this week: “I love travelling, I love sharing my work with audiences all over the world, and I love communicating, or at least making the effort to communicate with people from various cultures. These are all good reasons to come with my company to Bangkok. But the decision to bring ‘On the Edge’ was made in collaboration with the festival director [and founder] Vararom [“Khru Tip”] Pachimsawat. She thought this piece, which deals with the tensions and opportunities of life on the edge, are very relevant to people in Bangkok.” “Audience response to this piece proves how similar human beings are all over the world, despite all rivalries and differences,” Kolben says. “Since the piece is mostly presented using movement language, it crosses borders easily; and crossing borders, by the way, is one of the most present experiences in this piece. And people everywhere want to be close [to one another], avoid dangers, like being entertained and want to see things they’ve never seen before. And this is what we give them in this work.” And as for how Bangkok audiences should prepare for “On the Edge”, he says: “Another common response to dance in general, and contemporary dance in particular is: ‘I don’t like it because I can never understand it.’ Give yourself a chance and come to see this performance. I’m sure it will change the way you see this art form. And be careful: You may want more of it.”

That’s why “On the Edge” is the 18th IDF’s curtain raiser, and more contemporary dance performances, workshops and competition will follow in the subsequent weeks.

>> Kolben Dance Company’s “On the Edge” is at the 4th floor studio of BACC (BTS: National Stadium, exit 3), on Wednesday (by invitation only) and Friday at 7.30pm.

>> Find out more at Facebook.com/International

Tags:
International Dance Festival Across the