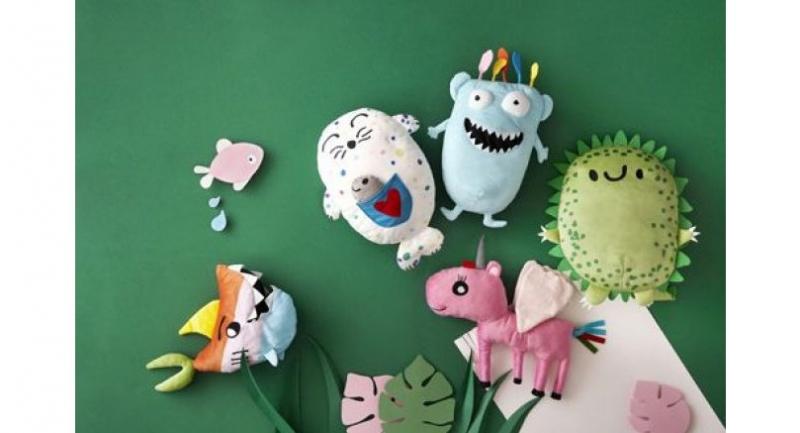 Ikea, the home furnishing retailer from Sweden, has unveiled five new designs for its special “Sagoskatt” soft toy collection consisting of a pink unicorn, a rainbow shark, a naughty monster, a mix of a hedgehog, dinosaur, and a monster, and last but not least a dotted seal, all designed by little artists. These global winners of the Ikea Soft Toy Drawing Competition 2017 will deliver smiles and happiness around the world. This special collection is now available at Ikea stores worldwide. “The Soft Toy Drawing Competition has been held for five consecutive years. We have also received excellent feedback in previous years. Children from around the world are interested in submitting their dream soft toy drawings. Last year, we received more than 87,000 submissions. All of the designs were fantastic, with a massive level of imagination. We were astonished at the degree they put their hearts into their drawings. We had a lot of unicorns, monsters, and many rainbow soft toys. However, kids’ all-time favourites like owls and penguins were among them too. Ikea has selected five designs as the global first prize winners and these will be made into real soft toys for this special Sagoskatt collection,” says Bodil Fritjofsson, product developer at Children’s Ikea. The selected winners are the unicorn by 5-year-old Peixin from China, the shark by 9-year-old Jimin from South Korea, the monster by 8-year-old Runar from Iceland, the hedgehog dinosaur by 8-year-old Greta from Sweden, and the dotted seal by 8-year-old Natalia from Poland. Each is priced at Bt239 and available at Ikea stores. Ikea Thailand is also holding the “Give Twice Campaign” in which Ikea and Megabangna will add one extra item for every soft toy purchased and dropped off in the donation box for the Special Olympics Thailand and Handicap International. All donated toys will be given to impoverished children. This campaign is a part of the “Let’s Play For Change” campaign which is being held for the third consecutive year to support children’s right to play and develop. Show your support and double the happiness and smiles for children at the Ikea stores at Megabangna, Central Plaza Westgate, and in Phuket from now until December 23.