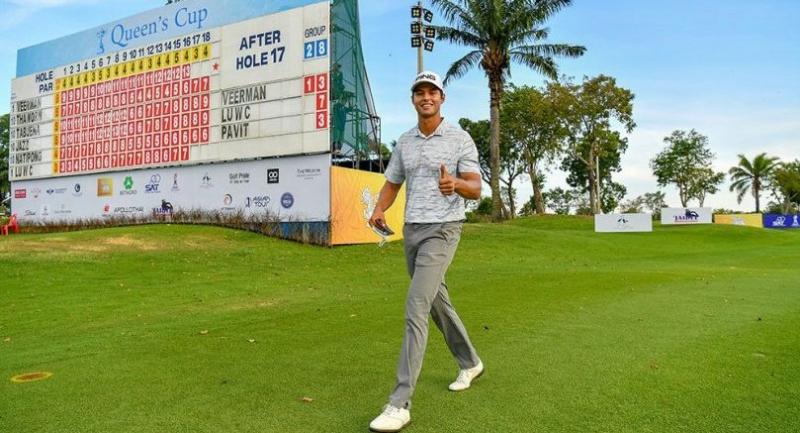 AMERICAN young gun Johannes Veerman produced a flawless round of 65 to grab a one-shot lead over defending champion Jazz Janewattananond and Filipino Miguel Tabuena going into the weekend rounds of the US$500,000 Queen’s Cup presented by Thongchai Jaidee Foundation.

The former ADT No 1 player sank five birdies at the par-70 Legacy Golf Club to lead on 13 under-par-127 and will tee off on Saturday in the last squad for the second time on the Asian Tour since the Yeander TPC in Taiwan last year.

“I grew up watching Thongchai Jaidee who is a role model for me. We have been friends and he’s invited me to his house. I’m happy to be leading in his golf tournament,” said the 26-year-old, whose mother is Indonesian.

“Miguel and Jazz are really good players. I respect their games and expect them to play well. When I tee up on Saturday and Sunday, I hope I will be one shot in front of them,” added Veerman, whose best result on the Tour was runner-up in 2017.

Jazz, who shot a 63 for a total 12-under-par 218, has good memories of this tournament even though it has been held at three different locations. He finished runner-up in 2017 in Samui and won the 10th edition in July at the Phoenix Gold Golf and Country Club. “When I play at home, my family comes to support me, which makes me feel comfortable,” said the 23-year-old Jazz, who has two Asian Tour titles to his credit.

“This is a good position to be in going into the weekend. I need to hit a lot of fairways, hit more greens and hole a lot more puts,” added Jazz, whose first Tour win occurred in the Bangladesh Open last year. Tabuena, who has posted three top-10 finishes, including the previous edition of the Queen’s Cup on the tour this year, shot a 63 without a bogey.

“I took advantage of the calm conditions this morning and I am pretty happy with my round. All my birdies were inside six feet because I am striking the ball well but there is a lot of golf left to play, so I am not going to get ahead of myself,” said the 24-year-old Filipino, who has special on-course support from his father this week. India’s Amardip Malik hit a 65 for lone fourth on nine-under-par 131.