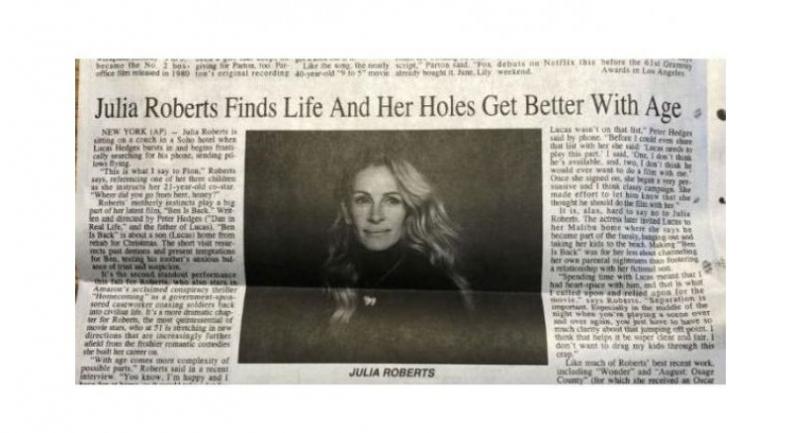 NEW YORK - A daily newspaper in the United States recently drew laughs and flak for a typographical error made in an article about Hollywood star Julia Roberts.

The Post-Journal, the newspaper where the story appeared last Saturday, Dec. 8, apparently picked up the story from the Associated Press which was released on Dec. 6, Thursday. Netizens have since taken to Twitter to share photos of the article, with the headline: “Julia Roberts Finds Life And Her Holes Get Better With Age”. The word “holes” was supposed to be “roles.”

Charles Apple, a news designer and journalist, took to Facebook on Dec. 10 to share a photo of the headline.

“This is making the rounds today. Was allegedly from the Jamestown, N.Y., Post-Journal,” Apple wrote. “Just so you know: As unbelievable as it seems, this error appears to be authentic.”

Apple later shared in the comments section a photo of the correction The Post-Journal published that day.

“A headline on Page D4 in Saturday’s Post-Journal should have read ‘Julia Roberts Finds Life and Her Roles Get Better With Age,'” it said.

American actress Busy Philipps also shared a photo of the headline on her Twitter last Dec 11. “This is why she’s a movie star,” Philipps said. “My holes have only gotten worse with age.”

“I like to think all of our holes are getting better with age,” he wrote on Twitter on Dec. 10. “Also, copyediting is important.”

Dr. Jennifer Gunter, a gynecologist and health advocate, wrote that the headline might need a bit of editing.

“I feel this title about Julia Roberts and holes perhaps needs a little finessing,” she wrote on Dec 10.

Meanwhile a certain Elizabeth tagged The Ellen DeGeneres Show’s Twitter account as she expressed her disbelief over the Post-Journal‘s boo boo.

“@TheEllenShow can’t believe this headline in our local paper…” the netizen wrote. “Julia Roberts will be glad to know her holes are getting better with age.”

It seems the newspaper really dug itself into a hole on this one.