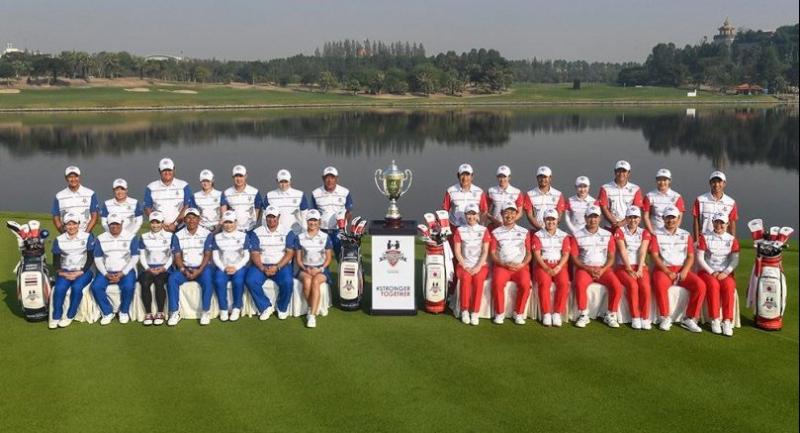 The Thai and Japanese golfers will today embark on what promises to be an intriguing three days of competition.

Exhausted Ariya afraid of letting down her legendary teammates Chon Buri - World No 1 Ariya Jutanugarn is determined to overcome fitness issues and help Thailand to win the inaugural Amata Friendship Cup against Japan which kicks off this morning at the Amata Spring Country Club.

Thailand’s sporting superstar has been busy with non-stop commitments during the four weeks she has been back home and even had to spend a few days in hospital two weeks ago due to influenza. She and her sister Moriya only joined their teammates for belated practice on Wednesday’s afternoon.

Ariya, along with five other Thai women and six men, will take on their Japanese counterparts in foursomes and fourballs format today and tomorrow before the concluding singles on Sunday.

“I’m still OK and will give it a 100 per cent out there, especially since I am in the same team as Thai legends which gives me extra motivation,” said 10-time LPGA winner Ariya after practice round on Thursday.

“I feel quite excited with this format and a bit fearful I might be a burden if my partner is a legend.

“Teaming with any Thai legend will be an honour,” added Ariya ,whose high-profile playing partners include eight-time European Tour winner Thongchai Jaidee, 10-time Asian Tour victor Prayad Marksaeng and the current Thai No1 and world No38 Kiradech Aphibarnrat, the Kingdom’s first holder of a card to play on the world-leading PGA Tour.Although the hosts are also blessed to have other world-class stars such older sister Moriya Jutanugarn and Thidapa Suwannapura, each an LPGA victor this year, Ariya says she would never underestimate Japan, whose men’s team is led by world No 47 Satoshi Kodaira and the women by two-time LPGA winner Nasa Hataoka. “You don’t know what’s going to happen in matchplay format as anyone can be on fire at any given day. I can’t say if we have the advantage but I can say we are a very strong team,” Ariya added.

According to Thai men’s captain Boonchu Ruangkit, Kiradech will be paired with Thai No 1 amateur Atthaya Thitikul in the foursomes this morning after which the remaining pairs will be revealed.

“I’ve never competed in this format before but I believe in the abilities of our female players. As for Atthaya Thitikul, she is the No 1 amateur in Thailand,” said Kiradech, who suggested that Ariya could strengthen her game even more by using the driver more.

“If she can use two-irons or three-woods and still be No 1, she could rule women’s golf for another five years by using the driver more,” he said.

Skipper Boonchu is somewhat concerned that exhaustion might take its toll on the Jutanugarn sisters but is still confident they can pull it off.

“Ariya and Moriya have been very busy and have had little time to practice,” he admitted. “But I still believe in their competence. Some of our players are stronger than the Japanese teams while the rest are quite close. I’m confident we have the edge a bit but we won’t underestimate Japan.”

The visitors players are also unfamiliar with the mixed-team format and say they’ll need time to adjust.

“This will be the first time the men’s and women’s have competed together. So we don’t what to expect but it will be fun,” said Japanese men’s captain Joe Ozaki.