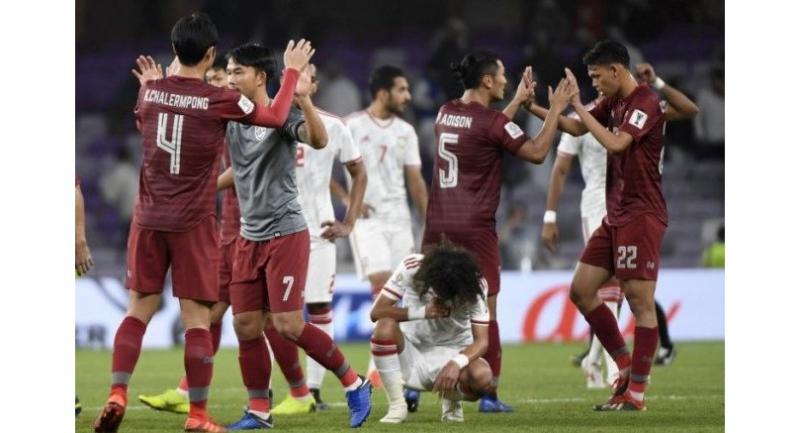 Hosts the United Arab Emirates and Thailand both booked their places in the knockout stage of the AFC Asian Cup UAE 2019 on Monday evening as a 1-1 draw at Hazza bin Zayed Stadium was enough to ensure both nations progressed.

Ali Mabkhout put Alberto Zaccheroni’s side ahead after seven minutes but Thitiphan Puangjan struck four minutes from time to earn the Thais a point that sees them take second place in Group A, following India’s late loss to Bahrain, thanks to a better head-to-head record.

While the UAE have qualified for the knockout phase for the second tournament in a row, Thailand will be featuring in the next round for the first time since reaching the semi-finals in 1972.

The hosts made the perfect start when, with many in the crowd of almost 18,000 still finding their seats, they hit the back of Siwarak Tedsungnoen’s goal.

Ismail Al Hammadi burst into the area and attempted to clip the ball over the Thai keeper, only for the ball to come back off the crossbar. But Mabkhout rose to head home the rebound from inside the six-yard box.

Khalfan Mubarak sought to double the lead 11 minutes later when he twisted his way past the Thai defence only to send a weak shot trundling through to Siwarak.

It took until almost midway through the half for the Thais to spark to life. Chanathip Songkrasin’s alertness allowed him to dispossess the UAE defence and feed Teerasil Dangda and his pass sent Adisak Kraisorn through on goal, only for Khalid Eisa to be equal to the task.

That was just a preview to the danger posed by Chanathip and, with four minutes left in the half, the Consadole Sapporo midfielder unlocked the UAE defence to secure the equaliser.

The midfielder’s deft ball into the area caused Mohamed Ahmad to panic and, in the ensuing mix-up, Thitiphan Puangjan slipped the ball past Eisa, with his strike delighting the vociferous band of Thais at the far end of the stadium.

A draw would suit both sides but, early in the second half, the UAE looked determined to reclaim the lead. Mabkhout was again the most likely source of a goal for the home side, and the Al Jazira man’s long-range strike had to be palmed around the post by Siwarak.

Teerasil threatened at the other end as he met Teerathon Bumathan’s corner, only for the ball to balloon high over the bar, and, despite attempts from both coaches to inject some urgency from the bench, the game trundled towards a draw that saw both teams go through.