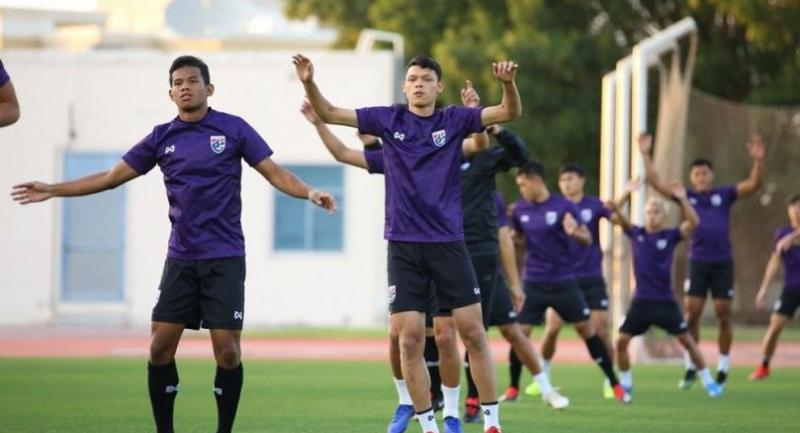 Rising to the occasion: Thailand’s footballers, seen here training in Al Ain, are being urged to lift their goals by coach Sirisak Yodyadthai. Thailand coach Sirisak Yodyadthai has told his players not to rest on their laurels after reaching the Asian Cup round of 16 and urged them to believe they can beat two-time finalists China (1984, 2004) on Sunday and make the quarter-finals.

The War Elephants were on the brink of elimination after losing 4-1 to India in their group-stage opener but roared back to beat Bahrain and hold hosts United Arab Emirates to a draw after Sirisak was appointed as caretaker replacement for the sacked Milovan Rajevac.

They arrived the Middle East with the modest target of simply making the knockouts but now that goal has been achieved, Sirisak is imploring his charges to maintain their momentum and aim for the business end of the tournament.

“I’ve reminded the players that we can compete with China – we have a chance [to beat them] too.  We cannot just be pleased with the round of 16. They must stay focused,” said the 49-year-old former assistant coach, who has overseen a surge in confidence despite having little experience at international level.

“At this point of the tournament, no team is stronger or weaker – we are all almost equal. Anything can happen as it’s a knockout format from now on,” added Sirisak, who must find a game plan to narrow the head-to-head record with the Dragons, who have 17 wins over Thailand in 26 meetings.

“The Chinese players are physically strong but I have yet to see more variety in their game. They can be dangerous, though, with long balls and set pieces.”

Sirisak is relishing the opportunity to test his managerial skills against Marcello Lippi, the China coach who led Italy to the 2006 World Cup in Berlin.

He does have limited experience of taking on a top-level coach, however, having been up against UAE coach Alberto Zaccheroni, who coached Milan to the Serie A title in 1999.

“I’m honoured to coach the Thai team against a team with a world-class coach like Lippi. This is a great opportunity to learn from him. But there will be no surrender,” said Sirisak who gave Zaccheroni a Thai wai in a show of respect after the UAE draw.

Striker Adisak Kraisorn, meanwhile, says he isn’t interested in looking back, even though he netted twice against the Dragons in a friendly 5-1 friendly international win in Hefei six years ago.

“That was so long ago. I’m more focused with the upcoming game now,” said the 27-year-old, who has 16 goals from 35 caps since 2013. “Everybody in the team wants to play in the match and show they can compete with China.”

Nor does Adisak have any nerves, even though none of the Thailand players has any experiencing of playing in the knockout stage of a major tournament.

“Of course there will be no more draw from now on. The winner will keep moving on,” said Adisak.

“We realise that [whatever happens] from now on is a bonus and [the experience is] so valuable to us players.

“This is the biggest event in Asia. We don’t know if we will be able to come back in the next four years or to come this far again, so we will fight together.”