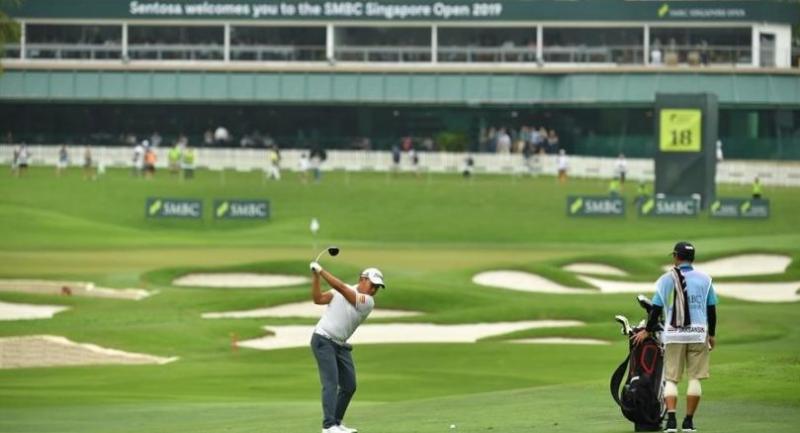 Singapore -  Poom Saksansin showed he is the man for the big occasion again when he completed an exhausting day with a second round one-under-par 70 to share the clubhouse lead with England’s Paul Casey at the weather-hit SMBC Singapore Open on Friday.

Regarded by Casey as his ‘nemesis’, Poom got the better of the world number 24 again in their opening round and matched the Englishman’s two-day total of seven-under-par 135 at the US$1 million event which has been disrupted by several weather suspensions over the last two days.

Close to two hours of play was lost in the morning due to inclement weather. It was abandoned at 7.05pm local time due to fading light and will now resume at 7.30am where 76 players will return to their positions on Saturday. The third round is not scheduled to start before 12pm.

The Thai had to return early to the Sentosa Golf Club to complete his remaining seven holes from his first round, before heading back to the starting tee after a short 45-minute break.

He birdied four of his last five holes when first round resumed to sign for a 65. After trading two birdies against one bogey for a 70, he is now looking forward to indulge in the local delicacies before taking a much-deserved rest and coming out to fire at all cylinders again.

"It has been a long day but I am very happy. Although I only shot a one-under for my second round, I think it was a very nice round. The wind was picking up and my iron-play wasn’t that good. To come back with an under-par score, I am really happy with it," said Poom.

"I feel really tired now. I have to go back soon, get a shower and then go to sleep! Casey played really nicely today. He hit it so far on the eighth hole. I really like that shot. I have to follow my own style because he hit it long and I hit it short! But it was good to see him play. I need to get more practice after this and speak to my coach about my iron-play today. It’s not good now. I keep hooking the shots. I just need a minor fix, I think. Hopefully I can fix that so it will be easier for me tomorrow," the inform Thai said.

At 54, American legend Davis Love III showed his level of fitness is still high after completing 25 holes to trail Poom and Casey by two shots with his 137 total at the season-opening event of the Asian Tour and Japan Golf Tour Organisation (JGTO).