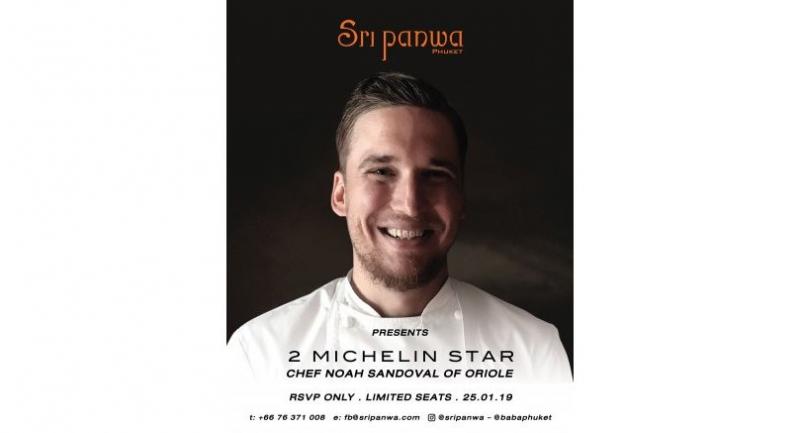 “We have had the honour and privilege to host many international Michelin-starred chefs in the past two years from Italy to Japan and we’re delighted to be collaborating with chef Noah for an one-off dining experience,” said Vorasit “Wan” Issara, managing director.

Oriole was awarded two Michelin Stars in the restaurant’s first eligible year and has retained two stars them. Sandoval himself was recognized as a Food & Wine Best New Chef, received three semi-finalist James Beard nominations, and was named Chef of the Year by the Chicago Tribune. Oriole has also earned 4-star reviews from various publications.

“I’m so thrilled to be in Thailand and Phuket for the first time and looking forward to showcasing some of Oriole’s signature dishes while incorporating some of the finest local ingredients like the Phuket Tiger Prawn and Thai herbs into the menu,” Sandoval told reporters.

He will be offering an eight-course Tasting Menu for Btt5,000-plus excluding drinks featuring, among other delights, Golden Osetra Caviar with Kampachi, Saffron and Coconut; Aged Hamachi Nigiri with Fermented Truffle Honey and Fresh Wasabi; Phuket Tiger Prawn with Makrut Lime, Mint, and Caramel and Halibut with Phuket Beer, Bok Choy, and Genmai.