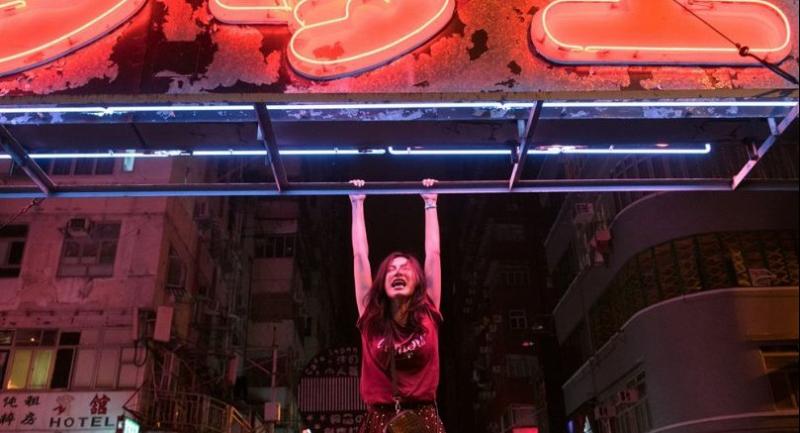 In the new GDH film “Friend Zone”, the two protagonists have to decide between a platonic relationship and romance

Director Chayanop Boonprakob has a thing about imperfect characters his directorial debut “Suckseed Huay Khan Thep” focused on a group of high-school boys who formed a band despite having no talent for music. His second movie “May Nai Fai Raeng Frer” (“May Who?”) was a romantic comedy that again centred on a high-school boy who loved drawing cartoons but was too shy to talk about his hobby because he was convinced his drawings were awful.

Now, for his third outing, “Friend Zone Rawang Sinsud Thang Phuan” (“Friend Zone”), which goes on general release today, the director is stepping out from his comfort zone and swapping teen comedy for a romantic comedy about young adults. The main character Palm (Naphat Siangsomboon) is a handsome flight attendant who has been in love with his best friend Gink (Pimchanok Leuvisadpaibul) for more than a decade. The pair has kept their relationship purely platonic and each of them is dating someone else. However, as soon as either of them faces trouble in love, they automatically turn to each other. But Palm’s kindness is a problem for Gink’s boyfriend Ted (Jason Young). So it comes as something of a surprise to Palm when Gink asks him – “Have you wondered... what if we were an item?” but also raises his hopes that the two might finally became an item. From the tagline and trailer, “Friend Zone” appears to be just another feel good comedy from GDH, a formula that has sent the studio and its predecessor GTH to success at the box office. Yet “Friend Zone” has something more, with Chayanop’s talent for comedy making it a truly enjoyable movie.

The audience who watched the premiere on Monday was full of praise for the comedy, which though crazy was also genuinely funny. The chemistry between the two protagonists and the cast added to the entertainment and make “Friend Zone” the perfect movie to watch on Valentine’s Day.

The director says his lead character is inevitably a loser, enough though it might not be immediately obvious. Palm, he points out, might look perfect but Gink is his flaw, as he is constantly waiting for her to say yes and cross the line from friend to lovers.

“Personally I think the term ‘loser’ means having an imperfection in one’s life and we feel inferior because of it. I like imperfection in a person, I appreciate and accept it and don’t think it’s humiliating to show our true selves instead of opting to show how cool we are,” he says. The relationship between a longtime friend Palm (Naphat Siangsomboon) and Gink (Pimchanok Leuvisadpaibul) is put to the test and they have to choose between being best friends forever or becoming lovers.

It’s the first time Chayanop has worked with the talented Pimchanok, who was praised for her ability to carry the whole story in the movie “Sing Lek Lek Thee Riak Wa Ruk”, and his second collaboration with Naphat, with whom he worked on the omnibus “Pohn Jak Fah” (“The Gift”)

The idea for the story was sparked when Chayanop attended a scriptwriting workshop held for trainees at GDH Studios. He was already a director but asked to participate to sharpen his skills. “Friend Zone” was the homework he submitted to trainers Jira Maligool and Vanridee Pongsittisak, both of them behind the success of GDH movies.

And just like with his previous films, it is inspired from his own experience. Gink and her boyfriend Ted (Jason Young) and her best friend Palm (Naphat).

“We all have awkward relationships with our close friends, especially when they are of the opposite sex,” he says.

And despite working as a flight attendant for Thai Airways before Jira offered him the job of directing “Suck Seed” and Naphat’s work, the sponsorship from Thai Airways, he says, is pure coincidence.

“I was infused with a strange happiness when we shot the scenes on the plane. It reminded me of when I worked in the catering preparing meals for passengers,” he says.

The focus, however, remains firmly on Gink and Palm as they try to find out what her boyfriend is hiding during his travels to Hong Kong, Myanmar, Laos, Cambodia and Vietnam to work on a special project of recording a song covered by lovely vocalists in each country in a different language.

The original idea was to make both Palm and Gink flight attendants but was changed to Gink being the manager of an actor and her boyfriend, a famous music producer. Chayanop is quick to admit that inviting singers from different countries for the soundtrack is a strategy designed to expand the market, even though GDH movies are already well known in the region. He adds that he enjoyed the experience of working with different teams in the countries where some of the scenes were shot.

“I am interested in the diversity of our neighbours and this tactic has never been used in a Thai movie before,” he says.

The highlight takes place in Hong Kong when the couple is riding a doubledecker bus and a crying Gink reaches and grabs hold of one of the neon lights where she remains hanging as the bus drives away. Fortunately, it comes back to collect her. Shooting at Shwedagon Pagoda in Yangon was less easy, as permission was hard to obtain.

But it’s the comedy rather than the romance that really makes the film and this ranges from gags to the dia¬logue and situations, drawing the audience to laugh even in the muchhated tiein product scenes.

The chemistry between the two protagonists and the dialogue are convincing enough for the audience to believe that the two are friends in real life. That proved a relief and over¬came initial concerns about the cast¬ing, especially of Naphat who’s a rel¬ative newcomer.

“He was inexperienced when we worked on ‘The Gift’ but he goes all out to do his best and sometimes that backfires. After ‘The Gift’, he worked in some TV dramas where he received help from director Yuthtana Lopanpaibul in acting more naturally and with better diction,” says the director.

Pimchanok once again shows her talent for making audiences laugh and cry. And even though Gink can be annoying at times, they believe in and love her. Her blunt and impulsive character might well remind viewers of the Korean romantic comedy classic “My Sassy Girl” but Pimchanok’s skill makes it obvious why Palm has been in love with her for 10 years.

“Pimchanok pays a lot of attention to detail and can play whatever I ask her to do,” he says.

The other actors are also well matched to their characters with Jason Young a good fit for Gink’s boyfriend and Nutthasit Kotimanuswanich, Benjamin Joseph Varney and Sukhapat Lohwacharin, as Palm and Gink’s friends, totally credible.

And with the movie shot in different countries, Chayanop confirms it’s the toughest work he’s ever undertaken.

“The production scale is much than larger but shooting overseas has given me so much experience,” he says, adding that he is more than ready to make another movie, this time with a musical theme.

“Perhaps about the lives of families and teachers,” he says, adding that both his parents are teachers.

“The idea always begins from what we like as a writer and I always choose a story that I enjoy and want to see on the big screen,” says the director.