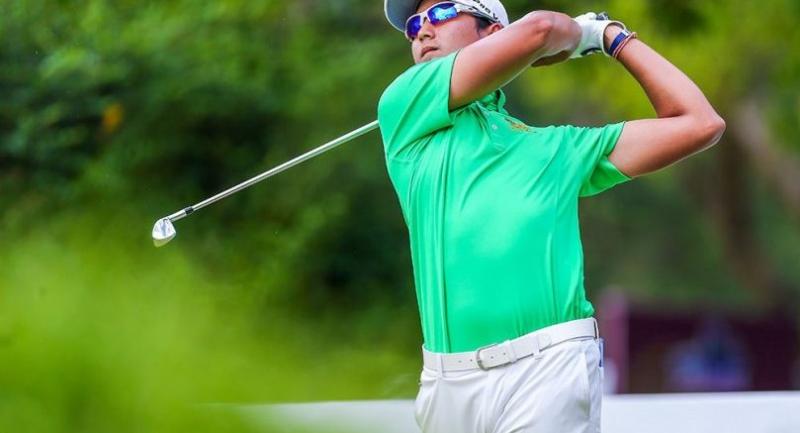 Lopburi - Tour rookie Sadom Kaewkanjana shot a sizzling 66 to grab a five-shot lead heading into the final round of the Bt4 million Thongchai Jaidee Foundation at 13th Military Circle Golf Course on Saturday.

The 20-year-old from Narathiwat, playing his only third event as a pro, sprinkled his round with six birdies against a lone bogey on the 17th hole to lead on 12 under-par-198, five shots ahead of countryman Chinnarat Phadungsil, one-time European Tour winner Lee Soo-min of South Korea and Seungjae Maeng of the US.

“I’m very confident today as I was putting so well. I shot four birdies in the first five holes which made me feel comfortable out there,” said Sadom, winner of the Asian Tour Q-School Final Stage in Nakhon Nayok in December. He was excited to play alongside Lee, winner of the Shenzhen International, a European-Asian co-sanctioned Tour in 2016.

“I wished to learn his game. But in the end I had to focus on my game by hitting the fairways and the greens and went for my putts,” added the local young gun who won his maiden All Thailand Tour title as an amateur in the 2017 Singha Pattaya Open.

“Right now I’m trying not to think about winning yet but I don’t know how I will react at the first tee-off on Sunday. But to hit the fairways, go for the greens and shoot scores from good putts is still my plan,” Sadom added. Fellow Thai Chinnarat hit a 64 to take the joint second place on seven under-par-203. The 30-year-old from Chanthaburi is more concerned with regaining his confidence and dares not placing too much hope in the final round.

“I’m regaining the form I used to have (when he won three Asian Tour titles between 2005-2009). I have been playing better over the past five tournaments but I’m still not confident with my game. So at this point I hope to work things out and get back to my old form first,” said Chinnarat who won his last title in the 2015 Singha Open. Seungjae Maeng of the US

Halfway leader Kazuki Higa of Japan was no where near his form, carding a 74 for a total five under-par-205 which saw him slip to tied sixth along with American Trevor Simby.