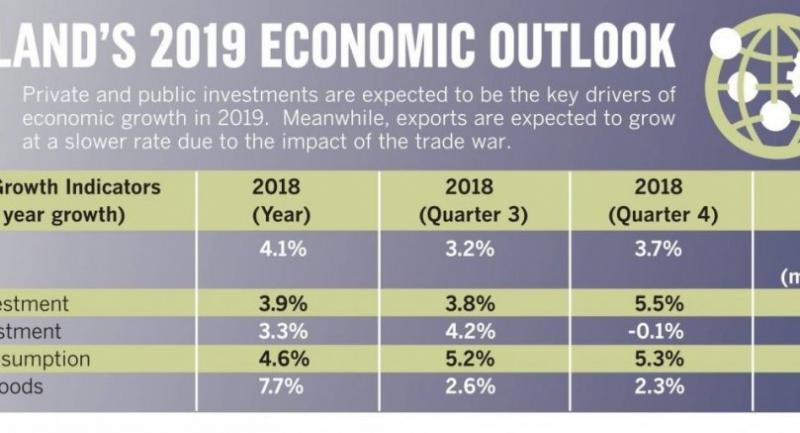 THE THAI economy will grow by 4 per cent in 2019, propelled by private and public investments, the upcoming general election and private consumption, according to a forecast by the National Economic and Social Development Council (NESDC).

The forecast range for this year’s GDP growth stands between 3.5 to 4.5 per cent, with a mean of 4 per cent, said the government advisory body.

The positive factors pushing this year’s economic growth include private and public investments, the road to the upcoming election and private consumption, the body’s secretary-general, Thosaporn Sirisumphand, said yesterday during a press conference.

Meanwhile, the risk factors for the economy include the ongoing US-China trade war and Thailand’s post-election political situation, he said.

Private investment is forecast to grow by 4.7 per cent in 2019, up from last year’s 3.9 per cent-growth year on year.

“The increase in Thailand’s private investment comes largely from investments in the manufacturing sector, which has seen accelerating growth in the past four quarters,” explained Wichayayuth Boonchit, the NESDC deputy secretary-general.

Public investment is also expected to increase significantly, growing by 6.2 per cent in 2019 compared to last year’s 3.3 per cent growth.

However, public investment saw a contraction of 0.1 per cent in the fourth quarter of last year.

“This is due to the decrease in government investment. Meanwhile, investment from state enterprises increased by up to 8 per cent,” Thosaporn claimed.

“For this reason, the fall in public investment in the fourth quarter will not affect the developing infrastructure projects,” he assured.

The road to the upcoming general election will also have a positive impact on the economy in the first two quarters. In total, between Bt20 million and Bt30 million will be spent on election campaigns by political parties, according to Wichayayuth. This will contribute between 0.1 to 0.2 per cent to the GDP growth.

“Private consumption is forecast to continue to grow steadily in 2019,” Wichayayuth continued. “This is because of recovering tourism figures as well as a fall in the unemployment rate.” “We expect 40 million tourists to visit Thailand in 2019, increasing from 38 million in 2018, which will, in turn, boost private spending,” Thosaporn added.

The level of unemployment has also contracted. In the fourth quarter of last year, the unemployment rate decreased from 1 per cent in the third quarter to 0.9 per cent.

When it comes to the risk factors, the trade war presents the highest level of uncertainty for the Thai economy. Wichayayuth said that if the dispute escalates further, it may damage Thai exports and the NESDC may have to adjust their economic forecasts for this year.

“The US is not only concerned about reducing its trade deficit with China. It is also making demands for China to restructure its economy and is concerned about China’s technological advancement,” he explained. “Thus, the trade conflict between the US and China may not be settled easily.”

Thai export growth has seen a decline throughout the latter half of 2018, growing by only 2.3 per cent in the fourth quarter despite a 7.7 per cent growth over the entire year. Exports are predicted to grow at the modest rate of 4.1 per cent in 2019.

“The political situation in Thailand also presents a risk factor to the economy,” said Wichayayuth, referring to the possibility of a post-election political instability.

He said the key concern for the economy was whether the new government would be able to agree on the 2020 national budget. If the budget is not finalised by October 1 this year, government spending and investment in the fourth quarter of 2019 may decrease, he said, adding that this would drag down the country’s economic growth in that quarter.

“The post-election political uncertainty may also lead to the delay of public infrastructure projects that are already in the pipeline,” he cautioned.