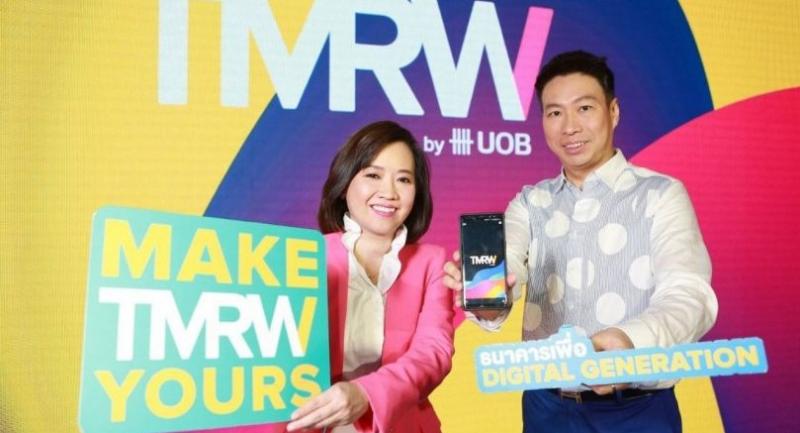 United Overseas Bank Thailand (UOB Thai) has launched TMRW, the first mobile digital bank in Asean, as part of its strategy to tap into the millennial market.

“We have been developing the TMRW digital bank since the beginning of last year, targeting  three to five million users in the Asean region in the next five years,” said Yuttachai Teyarachakul, managing director and country head of personal financial services at UOB Thai, yesterday during a press conference.

In regard to customer target, Yuttachai expects 500,000 to 1 million Thai users by the end of this year.

Yuttachai stated: “UOB is targeting a new market segment. Currently, most of our customers are within the ages of generation-x, with generation-y clients making up only 25 per cent of the total".

Generation-y or millennials are those between 18 to 30 years old, he said.  They are also referred to as the digital generation.

He did not disclose UOB’s investment in the digital bank, saying only that it was part of the Bt28 billion, four-year outlay for digital technology development the bank had allocated for the Asean region.

“UOB chose Thailand as the launching pad for its digital bank in Asean because Thailand’s digital generation makes up one-third of the country's population. Also,Thailand is ranked top globally in terms of the number of mobile banking users and third for mobile commerce according to the Global Digital Report 2019,” he said.

“The key feature of the TMRW bank is that a customer can register to create a bank account on their smartphones without having to visit a bank branch,” said Nantawan Suri, head of digital banking, UOB Thai.

“They can simply send in a photo of themselves and their ID cards through their smartphones.  Thereafter, TMRW customers can authenticate their identities at any TMRW self-service kiosks located at more than 200 outlets across Bangkok to create both a savings account and everyday spending account,” she explained, adding that they also have the option to create a credit card account.

The bank has strived to meet their demands, Nantawan said. "When they want to contact customer service of the TMRW bank, they can start by using the chatbot which uses machine learning to identify their first languages, including key slangs or mis-spellings in both Thai and English,” she explained.

If using the chatbot does not suffice, customers can call in to talk to an officer who will be able to see the conversation the customer had with the chatbot without the caller having to repeat the inquiry from the beginning, she said.

“One of the key challenges for millennials is that their incomes often lag behind their spending. Hence, the TMRW bank will also have saving incentive mechanisms, such as using AI to remind our customers to save money each month, as well as a built-in game and reward system to encourage them to start saving,” she said.