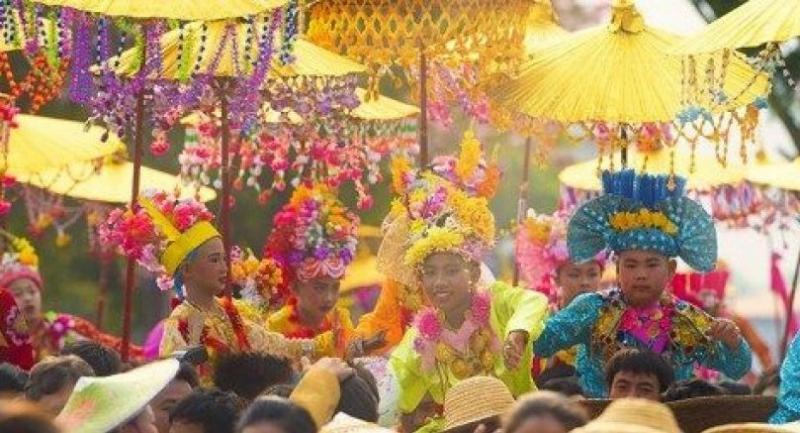 The annual Poi Sang Long Festival is an age-old ordination ceremony undergone by boys between seven and 14 years of age of the Thai Yai ethnic group in northern Thailand, and particularly Mae Hong Son province.

The annual ceremony normally takes place at every temple in Mae Hong Son, but visitors are recommended to head to Mueang and Pai districts to witness more ceremonial rituals.

The ceremonies consist of taking novice monastic vows and participating in monastery life for a period of time. Usually, a large group of boys are ordained as novice monks at the same time, as the Thai Yai people in Mae Hong Son believe that it will help gain more merit than a typical ordination.

The ceremony normally goes on for three days.

In the ritualistic ceremony of the first day, or Sang Long receiving day, the boys will enter a tonsure ceremony and dress up in the Sang Long dress. Prayers are chanted that invoke the pre-enlightenment period of the Lord Buddha when he was the “Jewelled Prince”. The boys will then be called “Sang Long”.

On the second day or “Krua Lu parade day”, the boys will be carried on the shoulders of their male relatives or mentors, called “Ta Pae Sang Long”, as their feet are not allowed to touch the ground except at home and in the temple. Golden umbrellas or “Ti Kam” in Myanmar style are used to protect them from the sunlight.

On the last day of the ceremony, which is called “Kam Sang”, the Sang Long or novice monks will enter the monastery for a period which can vary between weeks, months or years.

This year, the grandest Poi Sang Long Festival is scheduled at Wat Hua Wiang in Mueang Mae Hong Son, from April 2-5, 2019. Ceremonies are also scheduled at other villages and temples across Mae Hong Son. Some temples hold the event as early as March 20-23 or later, from April 19-22.

Visitors can also head to other districts including Khun Yuam, Mae Sariang, Pang Mapha to witness the ceremony.