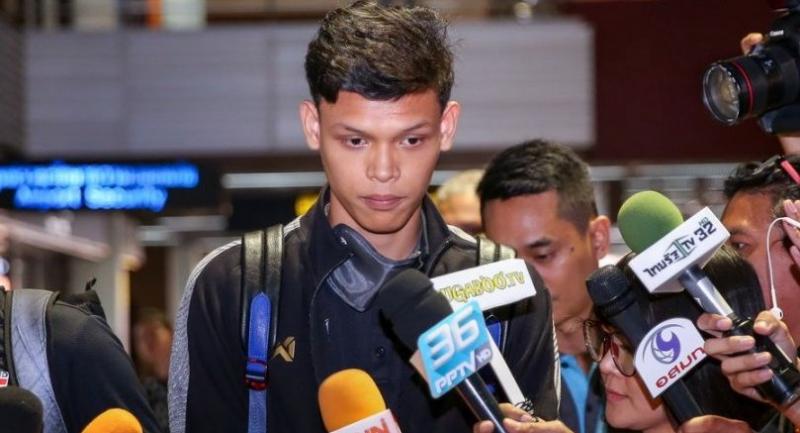 A downcast Supachai Jaided admits his shame at his costly dismissal.

Thailand’s key striker Supachai Jaided expressed his apology to fans after he was sent off for punching a Vietnamese player in the last game of the AFC U23 Championship Qualifiers in Hanoi on Tuesday. The 20-year-old was given a straight red card after he appeared to punch Vietnamese defender Tran Dinh Trong in the 58th minute as the Kingdom suffered a humiliating 4-0 defeat in the battle of the region’s top two teams.

The dismissal will result in Supachai being banned for at least one game when Thailand host the finals next January.

The young forward expressed remorse for his actions when the team returned to Thailand on Wednesday.

“I’m really sorry for the incident. It’s the first red card for me playing for the national team,” said Supachai, who comes from Pattani. “This shouldn’t have happen to the team. I’ve learnt a valuable lesson in my football career.”

It was particularly painful as the Kingdom, once the top football team in Asean, is now being been overshadowed by its neighbouring country.

“This is one of the biggest losses for me. I couldn’t believe we lost 4-0. But I have to congratulate Vietnam,” said the Brazilian coach. “It was my mistake. The players followed my plan but it didn’t work.

“But sometimes this happens in football. It wasn’t our day. Vietnam have been in good form and have confidence, so they performed well.”

Although Gama refused to comment on Supachai’s dismissal he accepted it had taken its toll on his players.

“After my player received a red card, it changed the game. We were disorganized after that and in this big tournament if we were disorganised, we lost control,” the Brazilian said.

He said a ban on Supachai would affect Thailand’s hopes in January but he hoped the finals would give Thailand a chance to gain revenge on in-form Vietnam.

“We’ve lost a very important player in January because of the red card,” he added. “This is a big problem for Thailand. We have to move on.”