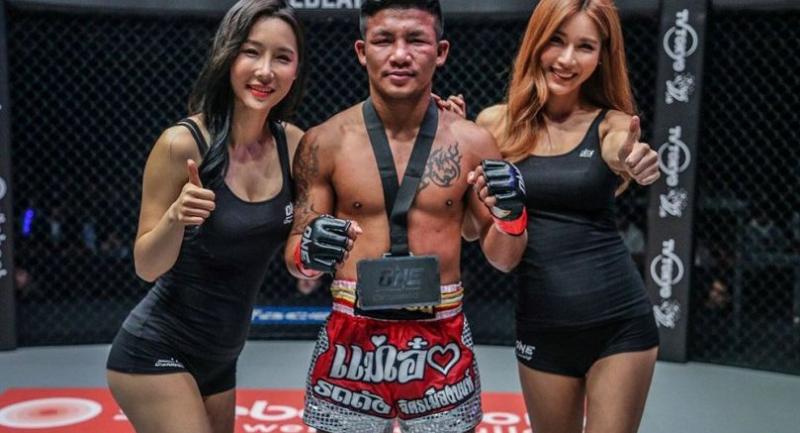 TOKYO - THREE-TIME Omnoi Stadium muay thai champion Rodtang Jitmuangnon shrugged off illness to beat Hakim Hamech of France in front of a full house in the One Championship: A New Era, at Ryogoku Kokugikan Stadium yesterday.

The 21-year-old from Phatthalung, who was suffering with a cold he brought with him from Thailand last week, summoned all his resources to grab a split-decision win over his French opponent in their One Super Series flyweight bout at the packed 11,000-seater sumo venue.

“I was a bit upset about not producing my best form out there,” said Rodtang, whose nose was running prior to the fight. “I wasn’t able to train as much as I wanted to,” added the Thai fighter, who was in tears during an emotional awards presentation.

“I was very concerned that I might lose but I tried to boost my mood by showing my [dance] moves during the opening walk to the cage,” said Rodtang, who wanted to celebrate the win by buying a new motorcycle, before his gym owner Suntharee Jitmuangnon dismissed the idea out of safety concerns.

Rodtang has now won all three of his bouts in the One Series following wins in Indonesia last October and the Philippines in January. In the catchweight (72kg) kickboxing, the other Thai fighter Yodsanklai IWE Fairtex tasted sweet revenge against Dutchman Andy Souwer, winning in the second round by technical knockout, 11 years after losing their last bout in the Netherlands.

"I've been waiting for 11 years for this revenge. I didn't expect to beat him so fast. I was really well trained for the bout." said Yodsanklai who has won all his three One Championship fights.

In Saturday’s other fights, hometown boxer Mei Yamaguchi lifted the spirits of Tokyo fans by winning the women’s mixed martial arts atomweight class against Kseniya Lachkova of Russia by submission in three rounds.

“Hearing the crowd cheering my name, Yamaguchi, made me stronger. I had no choice but to win in front of the fans,’’ said the 36-year-old, who is based in Tokyo.

Her win came as consolation for home fans after fellow Japanese hope Hiroki Hakimoto lost in three rounds by split decision to Josep Lasiri of Italy.

In the featherweight bout, Garry Tonon of the US remained unbeatable in the One Championship, delivering a technical knock out to Anthony Engelen of Indonesia. The 27-year-old from New Jersey has won all four fights dating back to March last year.

In the One Super Series bantamweight class, Panicos Yusuf of Cyprus relied on his superior martial skills to beat Malaysian Mohammed Bin Mahmoud by unanimous decision.

In the lightweight class Yoon Chang Min of South Korea knocked out Balla Sherry of India in the first round after the Indian, with a bad cut above his left eye, surrendered.