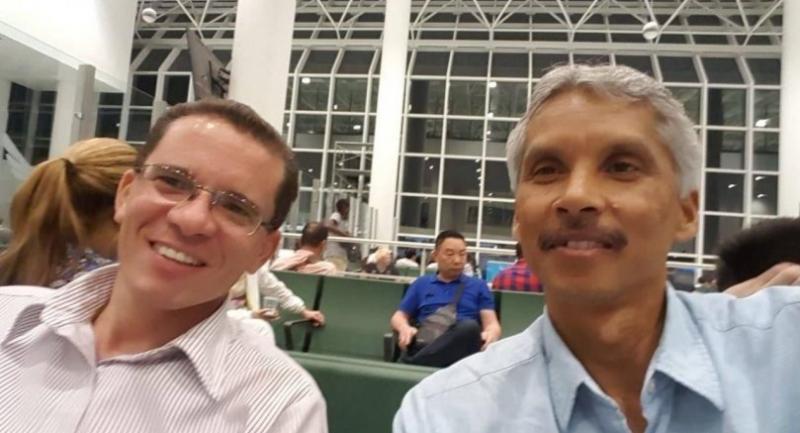 Youssry (left) and Pradeep wait at the Addis Ababa Airport to catch their flight to Kenya.

Two teachers from the Asia Pacific International University (AIU) in Saraburi, Pradeep Tudu and Yourssry Guirguis, arrived at Suvarnabhumi International Airport on March 9 to board a flight to Kenya.

Their itinerary included a stopover at Addis Ababa, where they were to board Ethiopian Airlines Flight ET302 on March 10 to Nairobi. However, they missed this connection because their flight from Bangkok was delayed.

Though initially frustrated, the two later counted their blessings because flight ET302 crashed shortly after taking off, killing all 157 people on board.

When Tudu and Guirguis were planning a university promotion trip to Kenya, they never suspected that a “miracle of grace” awaited them.

Indian national Tudu is the AIU’s vice president for finance and development, while Egypt’s Guirguis is a lecturer in AIU’s Faculty of Religious Studies.

Their journey began from Suvarnabhumi Airport at 1.15am on March 10, when they boarded an Ethiopian Airline flight to Addis Ababa. From Addis Ababa, they were scheduled to take flight ET302 at 8.15am to Nairobi, Kenya.

However, their plans did not go as expected. On March 9, Tudu received a message on his phone from Ethiopian Airlines saying: “Dear customer, your Ethiopian flight ET0629, from Bangkok to Addis Ababa on March 10 at 1.15am has changed. The flight will now depart at 3.45am on March 10.”

Upon receiving this message, Tudu and Guirguis felt a frustrated at the prospect of missing their morning flight at Addis Ababa. Tudu said: “We tried to call the airline office, but were not able to make any contact. We did not know if there was another flight and we did not want to be stranded in Addis Ababa.”

When they arrived at Suvarnabhumi, they looked for an Ethiopian Airlines office but were unsuccessful. They called the head office in Bangkok, but it was closed.

“The answering machine gave us a few numbers that work 24 hours a day. Each time we tried to call a number, it lacked a digit. We were unable to get through. We wondered why the numbers were not working. All of these attempts were to make sure that we would not miss the Ethiopian flight ET302 from Addis Ababa to Nairobi,” Guirguis said.

The flight from Bangkok took off at 4am and by 9am they were flying in circles over Ethiopia for an hour before the flight could land.

“We thought that the pilot was showing us the country,” Guirguis laughed.

Tudu and Guirguis landed in Addis Ababa at 10.30am on March 10 and were disappointed to find they had missed their flight.

They boarded their flight to Kenya at 1pm and were surprised at the commotion on the plane. When they inquired, they were told that Ethiopian Airlines flight ET302 had crashed six minutes after takeoff. That was the very plane the two teachers were scheduled to board, but had missed it due to their twohour delay.

“The fact that the plane crashed shortly after leaving the Ethiopian capital, killing all 157 people on board, left us in a state of shock,” Guirguis recounted.

“We were experiencing grief and counting our blessings at the same time. Instead of wasting time to grasp the reality, we prayed and tried to comfort the crew members who were weeping over the loss of eight of their colleagues,” Guirguis said.

The 25 passengers on their flight to Nairobi were asked to disembark. It took two hours for them to find their bags, and as a result the flight was further delayed.

At that time, their families and colleagues in Thailand and elsewhere, as well as those waiting to welcome them at the Adventist University of Africa in Kenya, had no idea if they were alive or not.

Finally, after completing their work in Kenya, Tudu and Guirguis returned to Thailand safely on March 25. Now, Tudu said, people always say “God saved your life” when they see him and his fellow teacher.

Guirguis’s son, Benjamin, a grade 5 student, said: “If my father was on the plan that crashed, I would not have been able to take a flight for ages.”

However, his father still asks: “Why did God spare our lives? Why did God delay the flight from Bangkok to Addis Ababa? What is so special about us?”  So far, the only conclusion is they were saved by a miracle.