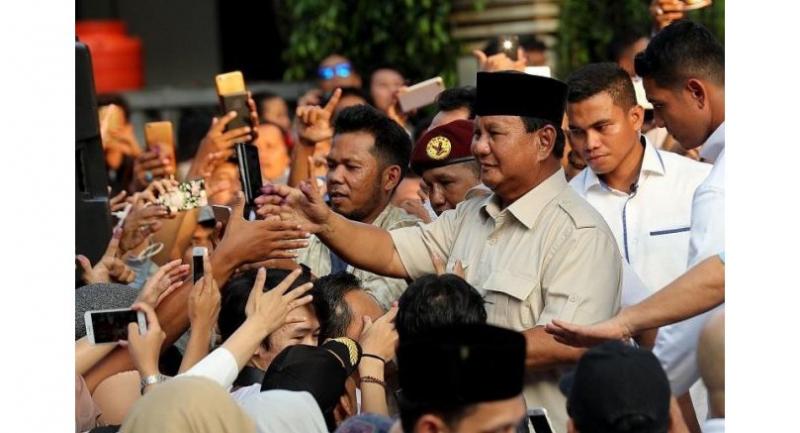 As quick-count results from independent pollsters that pointed to yet another failed presidential bid for him began trickling in, Mr Prabowo said yesterday afternoon that exit polls in more than 5,000 polling stations, as well as a quick count by his own campaign team, gave him between 52 per cent and 55 per cent of the vote.

Later last night, he claimed his team's "real count" showed him winning 62 per cent of the votes. This, he said, was based on votes taken from 320,000 polling stations, or about 40 per cent of the total.

According to quick counts of sample votes by five of these pollsters, Mr Joko had an edge of between eight and 10 percentage points over Mr Prabowo.

"There have been attempts by survey organisations that we know of, cooperating with one side, to steer public opinion as if we have lost," Mr Prabowo said, casting doubt on the impartiality of pollsters tasked with tallying unofficial preliminary results.

Coordinating Minister for Maritime Affairs Luhut Pandjaitan - a key member of Mr Joko's inner circle - said it would be impossible for survey agencies to doctor their results because their own reputations were at stake.

"In my opinion, we should not be prejudiced because we are all professionals," Mr Luhut said, "Quick-count results from different pollsters only have slight differences."

Mr Prabowo had also said in the afternoon that he was concerned about "occurrences" and "anomalies" that may have hampered his supporters at the polls.

He said: "Many ballots were not delivered to the polling stations. Many polling stations were opened at 11am (instead of 7am). Our supporters didn't get the invitation to vote, and so on. Many ballots had previously been cast in favour of (our opponent)."

There have been worries about possible unrest over the results of the divisive presidential race.

Mr Prabowo yesterday called on his supporters to keep calm and "oversee and guard our victory" across all polling stations.

"Everyone should stay calm. Don't resort to anarchy. Focus on safeguarding the ballot boxes because they hold the key to our victory, so we can fight the lies that have been told," he said. "I urge my supporters to not be provoked and avoid excessive, unlawful or violent acts."

This is the second time Mr Prabowo is squarting off against Mr Joko for the office of president. In 2014, he lost to Mr Joko by a slim margin of 6.3 percentage points, garnering 46.85 per cent of the vote to the latter's 53.15 per cent.

Quick-count results then pointed to a victory for Mr Joko too, but Mr Prabowo refused to concede defeat.

Minutes after Mr Joko declared victory in the July 2014 polls, Mr Prabowo claimed he was the actual winner, saying that his camp's own assessments on the ground showed they had won in many areas.

The Election Commission is required to announce official results within 35 days of the polls.

In his address last night, which amounted to a victory speech, Mr Prabowo pledged to be a president for all Indonesians, defending even those who had voted for his opponent. "This is a victory for the Indonesian people," he said, adding: "I will be and I am already the president of all Indonesians."