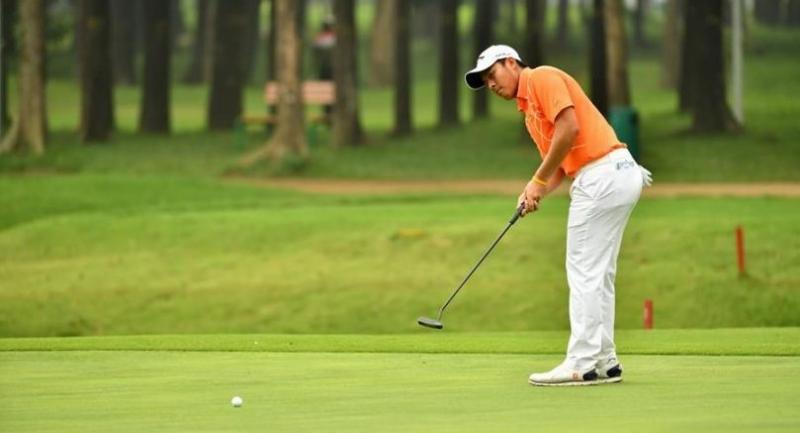 Penang, Malaysia - Thailand’s Nirun Sae-Ueng posted a three-under-par 69 to seize into the halfway lead with countrymen Kasidit Lepkurte and Poom Pattaropong at the PGM ADT Penang Championship on Thursday.

The 23-year-old Nirun started his round on fire, chipping in from 50 yards on his first hole for an eagle. He went on to trade two bogeys against three birdies to compile a two-day total of eight-under-par 136 with Kasidit (65) and Poom (68) at the Bukit Jawi Golf Resort.

Nirun, who earned his maiden ADT victory in 2015, had a hot putter to thank for his round where he only totalled 25 putts.

“I was just really confident all day. Especially starting off with an eagle helped to kick-off the momentum. I knew that even if I missed the green I could get up and down from anywhere because I have been putting it good these two days,” said Nirun.

Hoping to translate his consistent tee-to-green approach into a victory this week, the Thai will be adopting the same game plan for the next two days.

“This course is very narrow so I just need to stay focused off the tee and keep making greens. If the pin is in a good position, I will keep attacking it like today, but if I feel I need to aim for the centre of the green then I will trust my instincts,” added Nirun.

Starting on the first hole, Kasidit birdied four of his opening six holes before dropping a shot on hole eight for an outward 33. He notched four more birdies and dropped a shot on hole 16 before grabbing a birdie on his way home for an inward 32.

“The course is difficult but I managed to make a lot of birdies today because I was hitting it well. I am very happy with how I played and hopefully I will keep up this momentum for the next two days,” said the Thai, who made his breakthrough on the ADT in 2017.

Play was suspended at 2.55pm local time due to heavy rain but resumed at 4pm. The halfway cut was set at one-under-par 143 with 50 players advancing to the final two rounds.