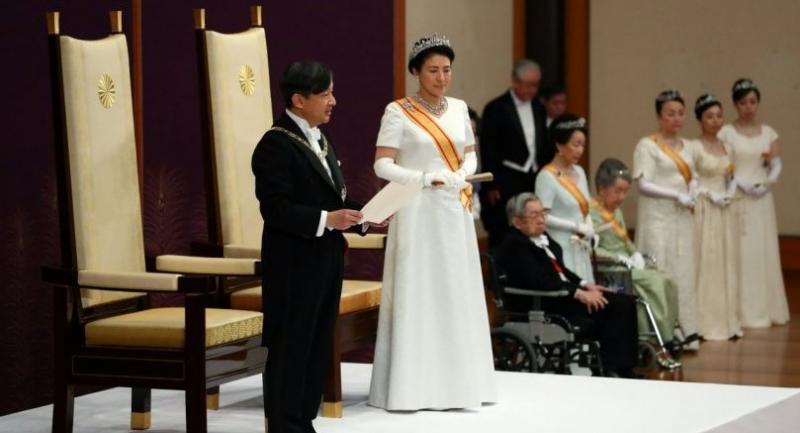 Japan's new Emperor Naruhito delivers his speech as new Empress Masako stands next to him during a ceremony to receive the first audience after the accession to the throne at the Matsu-no-Ma state room inside the Imperial Palace in Tokyo .//AFP

Tokyo - New Emperor Naruhito vowed Wednesday he would always stand with the Japanese people, as he prayed for world peace in his first address to the nation after ascending the Chrysanthemum Throne.

He swore to "act according to the Constitution... while always turning my thoughts to the people and standing with them".

Naruhito also said he would "reflect deeply on the course" taken by his popular father Akihito, who was seen as having brought the world's oldest monarchy closer to the people, especially during natural disasters.

"When I think about the important responsibility I have assumed, I am filled with a sense of solemnity," said Naruhito, 59, who took the throne after Akihito's abdication, the first in more than 200 years.

Naruhito promised to "bear in mind the path trodden by past emperors" and devote himself to "self-improvement".

He is expected to follow his father's modern style but faces a delicate balancing act in also upholding the ancient traditions of the Chrysanthemum Throne.

Replying on behalf of the people, Prime Minister Shinzo Abe said: "We are determined to create a bright future for a proud Japan filled with peace and hope at a time when the international situation is changing dramatically."