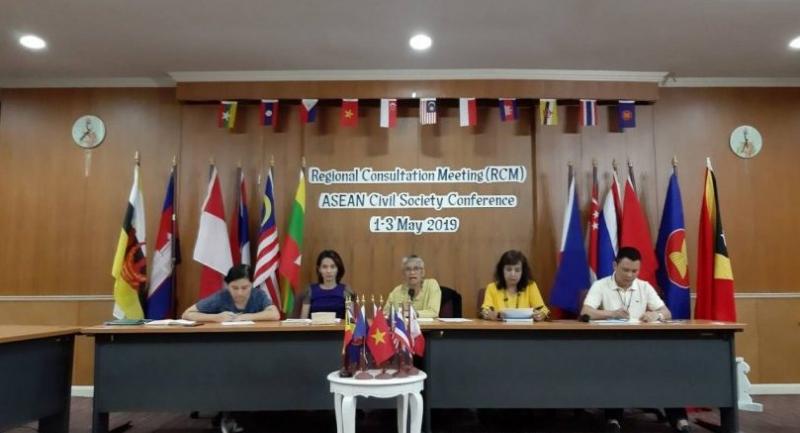 Chalida Tajaroensak, a member of the Thai Regional Steering Committee, (center) is at a press conference last week

ASEAN CIVIL society has expressed hope that an interface with leaders at the summit next month in Thailand would be meaningful in addressing relevant concerns on tough issues such as human rights and democracy, instead of becoming another ceremonial talk shop.

The Asean Civil Society Conference and Asean People’s Forum organising committee made the decision during a meeting last week to propose an interface meeting with Asean leaders when they gather for the summit in June in Bangkok.

Representatives of Asean civic groups have never met in person with Asean leaders for three consecutive years but they expect to get a chance when Thailand is chairing the regional grouping.

The Asean Summit in Thailand is scheduled for June 22-23, well behind the normal timetable due to political difficulties after the March 24 election in the host country. The official results of the election are due to be announced tomorrow and the new government is expected to sworn in by mid-June.

Asean civil society organisations will submit a proposal for the interface meeting with both Asean leaders and senior officials of the group. The proposal has been sent via the Thai Foreign Ministry and the Social Development and Human Security Ministry. Meetings with Asean leaders have usually been controversial in the past 13 years since the establishment of the Asean people’s forum, said Chalida Tajaroensak, a member of the Thai Regional Steering Committee.

The problem always occurs on both sides. The people’s side sometimes cannot find a common group of representatives and leaders and in many cases reject the representatives due to their own prejudices, she said. This makes the once-a-year interface meeting with the leaders hard to achieve in successive years.

The previous interface meeting with Asean leaders took place during Malaysia’s chairmanship in 2015. The last people’s forum meeting when Singapore chaired Asean last year was restricted financially and isolated from the leaders’ summit.

A statement of the people’s demands was submitted to leaders via the Singaporean foreign ministry, for it to distribute to Asean member countries. However, the Singapore statement would be attached to the new one to make sure the leaders in Bangkok gathering would get it. Hopefully, the Bangkok interface meeting, if it takes place, would not be a ceremonial talk shop, said Rachel Arinii Judhistari, a representative of Rational Caucus from Indonesia, said. It should be a meaningful engagement to share concerns about what goes wrong in Asean during the current shrinking civic space due to human rights violations and undemocratic practices in the member countries, she said. While some members of Asean civic groups wanted to address the Thai political setback with the leaders, Rachel said they had not reached a consensus yet.

“In principle, we want Asean members to be accountable for the failures of human rights and democracy in the region,” she said.

Seng Reasey from Cambodia urged Thailand as the chair country to guarantee a safe space where participants are allowed to discuss safely and freely.

The 2019 Asean Civil Society and People Forum is to be held under the theme “Advancing Peoples’ Movement for Justice, Peace, Equality, Sustainability and Democracy in Southeast Asia”.