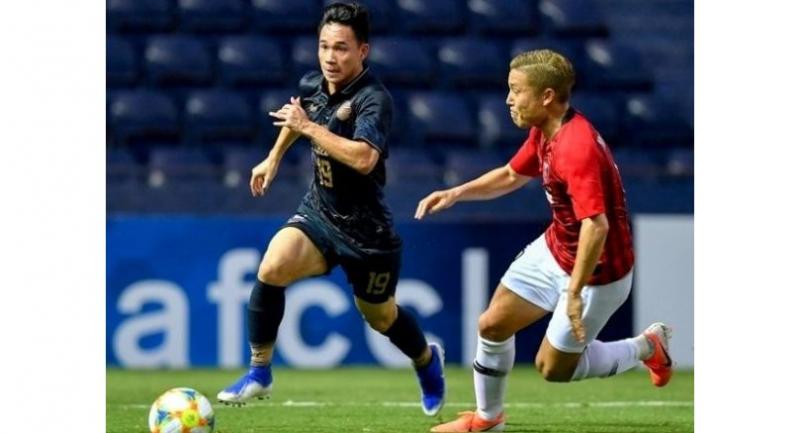 Buriram - Japan's Urawa Red Diamonds remain in contention for a spot in the 2019 AFC Champions League knockout rounds after beating Buriram United of Thailand 2-1 in a Matchday Five Group G tie on Tuesday.

The two-time champions moved on to seven points from their first five games and will take on Beijing FC at the Saitama Stadium 2002 in two weeks’ time, needing a win to advance to the last 16 after goals from Shinzo Koroki and Yuki Muto earned Urawa the points at the Buriram Stadium.

Urawa took an early lead when Koroki found time and space behind Andres Tunez to collect Ewerton’s well-timed through ball and the striker made no mistake, despite a slightly scuffed finish.

And the Japanese visitors could have doubled their advantage before the 10th minute mark, with Ryosuke Yamanaka twice going close from set-piece plays, the first seeing Siwarak Tedsungnoen deny him with a dive to the left and the second seeing the Thai goalkeeper go the other side to keep the ball out.

Urawa were to rue those misses in the 13th minute when Buriram found themselves back on level terms. Pedro Junior started and finished a fine move that saw him drive towards the Urawa defence before laying the ball out wide to Narubadin Weerawatnodom and, with Pedro Junior continuing his run into the area, he finished with precision when he received the return pass.

Oswaldo Oliveira’s side, however, reclaimed the lead midway through a pulsating half and Ewerton was again involved, with the Brazilian this time winning the ball on the edge of the Buriram penalty area before slipping his pass through to Muto, and he made no mistake with his shot across Siwarak.

After an entertaining opening 45 minutes, the second period always had a lot to live up to and it was no surprise that the pace dropped.

Substitute Suphanat Mueanta had Buriram coach Bozidar Bandovic on his feet midway through the half when his header flew wide of the target, while Urawa should have wrapped up the points via Kazuki Nagasawa, but his shot at the end of a rapid fluid move flew over Siwarak’s goal.

Koroki also saw his effort clear the crossbar with 14 minutes to go when his attempt to lob the goalkeeper also flew over the goal, but it mattered little in the end as Urawa held on to secure their second win of the campaign.