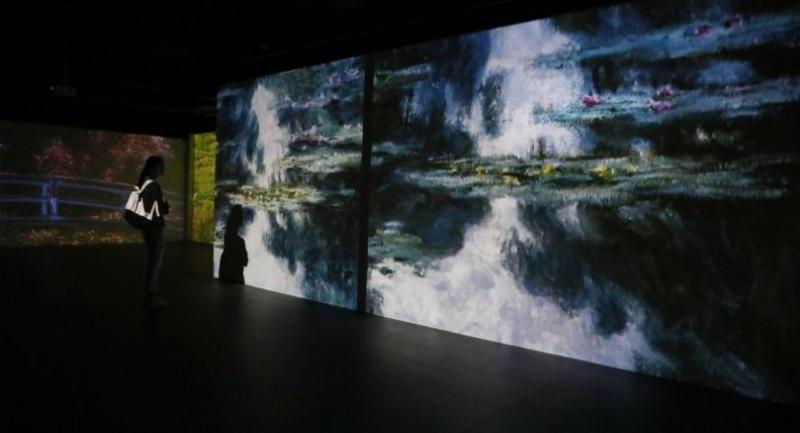 WATER LILIES burst out of their frames as ballet dancers twirl around the room. Above them, stars shine brightly from the darkened sky and geometric forms bounce around the walls, all to a soundtrack of tuneful music.

No, this isn’t a psychedelic experience but a fully immersive sequence of artworks by such renowned masters as Claude Monet, Edgar Degas, Vincent Van Gogh and Piet Mondrian projected in glorious 360-degree views on three-metre panels by about 30 HD projectors over the entire 1,200 square metres of RCB Galleria on the second floor of River City Bangkok. Each of these artists rejected the styles of the past, embracing instead innovation and experimentation in form, materials and techniques in order to capture the tremendous upheavals of their time.

The exhibition is developed by Artplay Media, an international company based in Moscow and Berlin with expertise in modern multimedia formats. The exhibition, which finished in June last year after a year’s run at Alte Munze in Berlin, has been redesigned to fit the space of River City Bangkok. Renoir’s ladies come to life and move to the rhythm of the music.

“I have always been interested in bringing unique experiences to Thailand, especially multimedia presentations that are easily accessible to people of all ages. When friends told me that this exhibition was showing in Berlin, I immediately looked for the video clips on YouTube and decided to bring it here. It took a while but I finally succeeded in convincing the organisers to work with me,” says Linda Cheng, managing director of River City Bangkok.

The exhibition is presented in a loop of 65 minutes consisting of 16 short films mainly devoted to the art of each master, projected onto big screens in two multimedia rooms. The projections melt into one another, coming to life and moving to the rhythm of the music, drawing the viewer into a flood of colours and sounds.

“‘From Monet to Kandinsky’ is by Vision Multimedia Projects and I’ve always been interested in the artists of this era because they were non-conformists who were not afraid to go against society. They pursued their passion to do what they wanted to do and showed their art in their own ways thereby inspiring others to follow their dreams,” she adds.

More than 1,500 pieces, the originals of which are displayed in some 20 museums around the world, are in the show. “The paintings are in the public domain. We don’t use the paintings on their own but we make a new product –an artistic show. It’s not a slide show, but we blend the works together into an animated graphic with sound, with some parts disappearing and others overlapping,” says Oleg Marinin, managing partner of Vision Multimedia Projects.

His team begins by taking digital pictures of the selected paintings in HD resolution and developing a short bio of each artist. The most difficult thing, he says, is to find the right balance between still and animated pictures and the accompanying soundtrack.

“We can’t make it like a simple slide show but at the same time, we have to be careful not to include too many special effects and animation otherwise it risks becoming like a cartoon,” he continues.

As the title suggests, the loop begins with the works of Monet whose creation of luminous effects by means of separate short strokes became a classic technique in conveying the sensation of light and air. His famed water lilies, a portrait of a woman with a parasol and a stunning sunrise, for example, are projected dynamically in panoramic view accompanied by Chopin’s Piano Concerto No 2 In F minor Op 21 Larghetto to complement the visual experience.

“The most important components in any visual experience are the beginning and the end. We begin with Monet because he is considered one of the founding fathers of Impressionism. The second half of the 1800s saw a revolution in art but he and Manet painted what they felt in an age when artists normally painted what they saw.

“We end with Kandinsky, who transformed those feelings into abstract art. He showed that art can live without the object. In the presentation, we try and show what happened in the years between Impressionism and Abstractionism,” he says.

The music plays a vital role in heightening emotions. The dramatic piano track “Inanna” by Armand Amar synchronises with the works of tortured artist Van Gogh. In his famous painting “Almond Blossom”, visitors will see almond flowers falling from the branches against a blue sky while the swirling patterns of a moon- and star-filled night sky from his “Starry Night” roll across the 360-degree panels. Renoir’s sentimental and romantic paintings are paired with “La Valse d’Amelie” by Yann Tiersen, and compositions “Winter Wind” and “Code Name Vivaldi” by the musical group the Piano Guys are used for the works of Klimt and Malewitsch respectively.

“I can’t tell you much about the music, but what I know is that some composers are inspired by these paintings. The idea is to support and give better feeling to the art,” says Marinin.

The exhibition, he continues, aims to make fine art more accessible to a larger audience who do not regularly visit museums or galleries. When this exhibition showed in Berlin, it was so successful that its initial six-month run was extended to a full year.

“It’s a complementary approach to art. It’s like you see a blockbuster adapted from a book. Reading the book, some people will spend hours imagining the characters and the settings but not everybody will come away with such a strong impression. Going to the cinema and watching the blockbuster based on the same book makes it easier for spectators of all ages to get those feelings,” he says. Kandinsky’s abstract art absorbs the viewer in a flood of colours and sounds.

“Both venues are very popular and crowded but the presentations adopt different approaches. The Teamlab collective doesn’t present works by the world’s masters but creates their own interactive digital art experiences. The presentations at Atelier des Lumieres are similar to what we are doing here. Mondrian’s geometric forms and grids come out of their frames.

“The success depends on many factors – culture, country and probably even the city. I can’t imagine Teamlab playing their content in Paris because a lot of tourists go to Paris to see the masterpieces of the artists. Likewise, the multimedia show of modernist and impressionist artists might not be popular as what Teamlab has created in Japan,” says Marinin.

After “From Monet to Kandinsky” ends in July, RCB Galleria will host a second multimedia exhibition “Italian Renaissance” starting in August. Also developed by Artplay Media, it will present the works of three Italian masters of the Renaissance, namely Da Vinci, Michelangelo and Raphael.

“From Monet to Kandinsky” continues until July 31 at RCB Galleria on the second floor of River City Bangkok, next to Si Phraya pier. Boat transfer is available from BTS Taksin Bridge.

Tickets cost Bt350 for adults and Bt250 for students and seniors and are available at the door or at www.ZipEventApp.com.