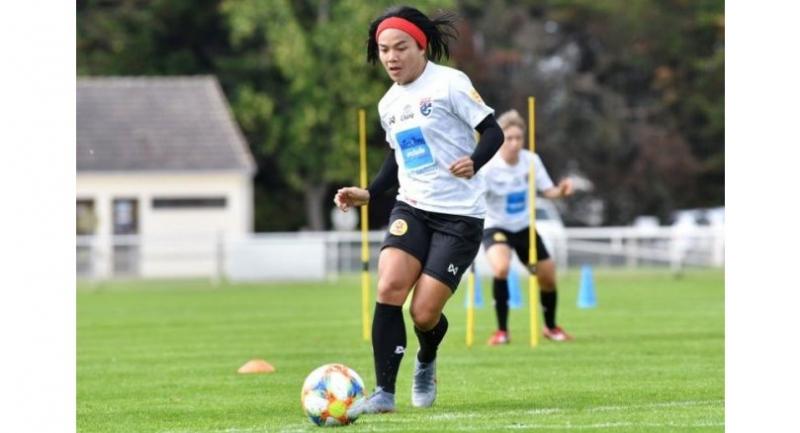 Veteran striker Kanjana Sungngoen hopes Thailand will earn the tag of giant-killers when they confront France in a World Cup warm-up game at La Source stadium in Orleans on Saturday.

The 32-year-old forward from Chon Buri province will lead the line for the first of three matches to prepare them for the quadrennial football extravaganza, which begins on June 7.

Kanjana who has represented the senior team since 2009, says she and her teammates are determined not to lose to the powerful French, who finished fourth at the 2011 World Cup in Germany and the quarter-finals in Canada four years ago.

“We don’t want to lose,” said Kanjana, also a member of the 2013 SEA Games gold medal team. “We want to have a good time out there but also to put up a great fight. If possible, I want to score a goal too.”

The Thai women spent all week focusing on defence and counter-attack, with coach Nuengrutai Srathongvian pushing her side to brace themselves for an onslaught from the hosts.

“We are a bit under pressure as France is a world-class team,” Kanjana admitted. “We’ve never played them before so this will serve as a good opportunity to learn from a team at that level.

“We have to play as solid as possible and stick to the coach’s game plan.”

Thailand’s only previous World Cup appearance was in 2015, when they did not survive the group stage. They managed one win, 3-2 over Ivory Coast, but lost 4-0 to both Norway and Germany.

“We are ready physically and tactically. Even our game plan is on the defensive approach, we won’t hesitate to counter attack if opportunities come,” Kanjana said.

Their first World Cup game could not be tougher – they face the United States, the defending champions, on June 11. The Americans are odds-on favourites to retain their crown and if they do so they will become the first country to win the event four times.