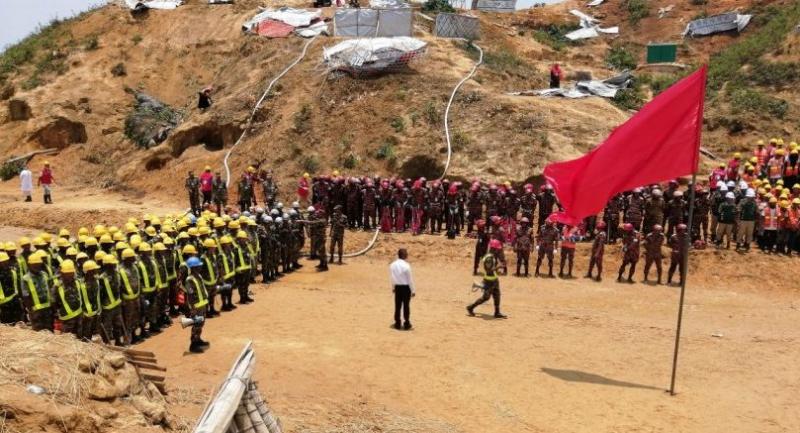 Members of Bangladesh's Ministry of Disaster Management and Relief, the Armed Forces of Bangladesh and the Bangladesh fire services organize a drill on disaster management at the Rohingya refugee camp in Ukhia on May 23, 2019. (Photo by AFP)

IN RESPONSE to widespread accusations that Myanmar government’s lacks the political will to welcome back Rohingya who fled violence in Rakhine state, Myanmar has pledged to accept more returnees after coming to an agreement with Bangladesh authorities, a cabinet member said Wednesday.

“Earlier, we promised to accept 300 returnees on a daily basis. With the help of technology, we are now trying to accept more [returnees],” Union Minister Dr Win Myat Aye, vice chairman of Union Enterprise for Humanitarian Assistance, Resettlement and Development in Rakhine (UEHRD), told The Nation in a phone interview.

More than 900,000 stateless Rohingya refugees live in crowded settlements in Cox’s Bazar. It is estimated that 741,000 of them have fled from Myanmar since August 2017, according to the United Nations High Commissioner for Refugees (UNHCR).

The repatriation plan reached by Nay Pyi Taw and Dhaka to have the first of batch of 2,000 returnees has hit a stalemate since last November due to the refugees’ fears for their safety upon their return. The minister said there is “no limit” to how many returnees would be accepted, as it would need more discussion between the two countries. The refugees’ willingness to come back is more important, he said.

The minister denied accusations that Myanmar does not want to welcome back the Rohingya. He said the repatriation process could begin once Bangladesh accepted it. “We are now ready for this [repatriation of returnees], and Asean has acknowledged that. Now, we are awaiting Bangladesh’s decision and cooperation,” he said, adding that the timeline is up to Dhaka as well. In a bid to extend cooperation with international partners to make a success of the repatriation process, Myanmar on Tuesday re-signed a memorandum of understanding with the UNHCR and the United Nations Development Programme. The tripartite agreement was first signed in Nay Pyi Taw on June 6 last year, and has been extended for one more year.

“This MoU aims at creating conducive conditions for the voluntary, safe and sustainable repatriation of refugees and to create resilient livelihoods for all communities living in northern Rakhine state,” said a joint statement issued after the signing. Win Myat Aye stressed three core areas in which Myanmar agreed to cooperate with Asean during Asean secretary-general Lim Jock Hoi’s recent visit. Myanmar would prioritise capacity building, information dissemination and basic needs in order to speed up the repatriation process.

“First, capacity building programmes will begin soon. For that, we will supply some necessary equipment including computers, and ensure we improve our staff’s skills so they can quickly facilitate the process in a systematic way,” he said.

“The second core area is information dissemination. People from the other side (refugees who are now in Bangladesh) do not know anything about our readiness for the repatriation process. They do not have any access to the correct information there. So, we will find proper ways to disseminate the right information to the returnees.

“Lastly, we will provide all residents, including returnees, with the basic needs – health, education, shelter and creating jobs, etc. We will cooperate with Asean to ensure those living in Rakhine state have the equal right to basic needs, regardless of race and religion.”

The minister called for participation by returnees to make repatriation successful. He urged them to participate in the process of issuing National Verification Cards (NVC), which the Immigration Department handles.

“At the moment, most of the refugees mistakenly stick to a misleading belief that NVC card holders could be treated as foreigners,” he said. “Due to the lack of information, they still do not believe that NVC cards mean a lot in their path to citizenship. Such a belief is totally wrong, because issuing the NVC cards is the very first step in officially providing them with the right to citizenship.”

He stressed that the returnees would be entitled to citizenship only after being issued the NVC card. “It is not something that they [returnees] should be afraid of. It is part of the process that everyone has to go through to become a citizen of Myanmar,” he said. Myanmar could allow international assessment teams to observe the real situation on the ground, he said.

“The initial assessment that Asean [in March] recently undertook was totally independent, as they managed to observe things without a single interference by our government,” he said. “We just took them to the conflict-hit areas and ensured security for them, which means our security forces just took care of safeguarding them from any potential harm that may occur in a considerably conflict-hit zone.” He said Myanmar fully respected the freedom of the assessment team and supported them to freely observe the real truth on the ground. The minister said the comprehensive assessment of Asean would begin on the very first day of repatriation, which is expected soon.