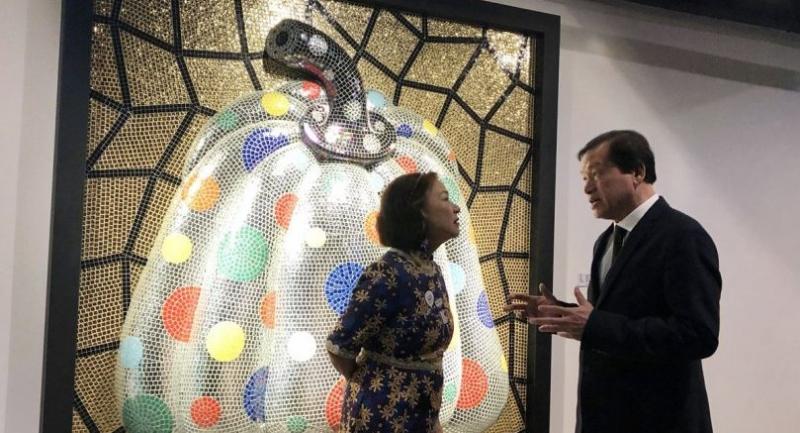 “I Carry on Living with Pumpkins” is in the “Let’s BAB” show, helping drum up interest in the coming second edition of the Bangkok Art Biennale. Photo courtesy of BAB

The success of the inaugural Bangkok Art Biennale last year – drawing more than three million visitors – was assured largely by the inclusion of the glorious, wildly photogenic installations by Yayoi Kusama, the Japanese op-art wizard whose work is adored from Alaska to Zimbabwe.

A string of the eccentric Kusama’s polka-dot pumpkins, loaned from her Tokyo studio and Filipino couple Maria Clara and Jose Isidro “Lito” Camacho, were undeniably the biggest attractions at Siam Paragon and CentralWorld.

Now Maria Clara Camacho is back with more from her collection to share with Kusama’s Thai admirers.

The “Pumpkins” (from 2016-2017) and “I Carry on Living with Pumpkins” (2015) are on display through Saturday at “Let’s BAB”, another impressive group exhibition taking place at BAB Box in the One Bangkok complex on Rama IV Road.

Professor Apinan Poshyananda, chief executive and artistic director of the Biennale, specifically selected pieces from that event as well as new works to help introduce BAB Box and promote the next Biennale. Apinan vows the second Biennale will be even better than the first. “Marina Abramovic, the world’s leading performance artist, will be our international adviser, so please stay tuned for some surprises.”

Camacho was duly impressed by the vibrancy of Bangkok’s art scene when she visited last year. She and her husband own one of the most impressive Yayoi Kusama collections on the planet, as well as six major digital artworks by teamLab, the Japanese media-art collective.

She spent some time last month chatting with The Nation.

You’ve been to Bangkok many times – how has it changed?

It’s become so much more developed, with some amazing building and an art scene that’s become really lively thanks to Khun Apinan.

On my first visit for BAB, they had the flying pig and flower installation by Choi Jeong-hwa. I was surprised when I came this time and all the art was new and completely different.

It was incredible! I didn’t realise so many people in Thailand were interested in contemporary art.

We visited the Bangkok Art and Culture Centre and again I was surprised how many people came to watch the performances and to look at the art. There were young people in large groups, like groups of friends who just wanted to enjoy art for an afternoon and families with kids. It was very refreshing to see.

What do you find most interesting about Kusama’s work?

We first saw her work at the National Museum of Modern Art in Tokyo in 2004 and she wasn’t very well known yet.

But the whole first floor was devoted to her and I was really impressed with the range of media she uses, from oil on canvas to beautiful paper creations to her Mirror Room to film. She’s also a poet and novelist, so her creativity knows no bound.

She is devoted to her art and really doesn’t care what people think of her work, how it’s categorised. She’s completely independent, a free spirit.

We have more than 100 of her works and every one is unique. We don’t mind lending them out because we think the whole world should know about her. That began happening in 2012 when she collaborated with Louis Vuitton. She designed over 500 window displays for Vuitton stores around the world and it made her a household name.

Kusama has long dealt with psychological issues. How do you think her work helps heal her?

Without her art, she would have committed suicide a long time ago. She says art is her therapy, but it’s also therapy for all the people of all ages who enjoy her work.

One New York artist told me that Yayoi “invented fun in art”, and her work is certainly among the most fun art you can find, especially the interactive pieces like the Infinity Mirror Room. That’s why there are long lines waiting to see her art.

When I first saw the Mirror Room in 2004 I was the only one in the room and could stay as long as I wanted, but now they only let you stay inside for 30 seconds because there are so many people queuing up.

We first met her in 2011 at her studio and the last time we met was two months ago. She is 90 now and still quite strong, but she uses a wheelchair because her knees are painful. But she strongly believes there is much more for her to do and create before she dies and she doesn’t want to be disturbed. So she sees very few people.

What advice would you give someone thinking about collecting contemporary art?

They should do a lot of research before buying, go to museums, watch films about art, talk to artists and curators. There is so much to learn – it’s not just going into a gallery and seeing something and buying it. You have to know about the artists. The better collectors are the most knowledgeable.

With such fast progress in Bangkok, how do you rate its potential to be a key Asian hub of contemporary art?

Bangkok a huge population and art only needs the support of the audience to thrive. You need an audience that appreciates art and artists who are willing to sacrifice and devote themselves fully.

Do you collect any Thai artists?

No, I don’t because the art can’t be exported. I’ve seen Thai artists who exhibit in the Philippines, at the Ayala Museum, such as Natee Utarit, who offered a critique of Western modernism in his 2017 show “Optimism is Ridiculous: The Altarpieces”.

If I find something really compelling, I’ll buy it, but when we collect an artist, we collect very deep, so that we accumulate almost a retrospective, from their early works to their more recent. I can’t do that with an artist whose work can’t be exported. ‘Much more left to do’