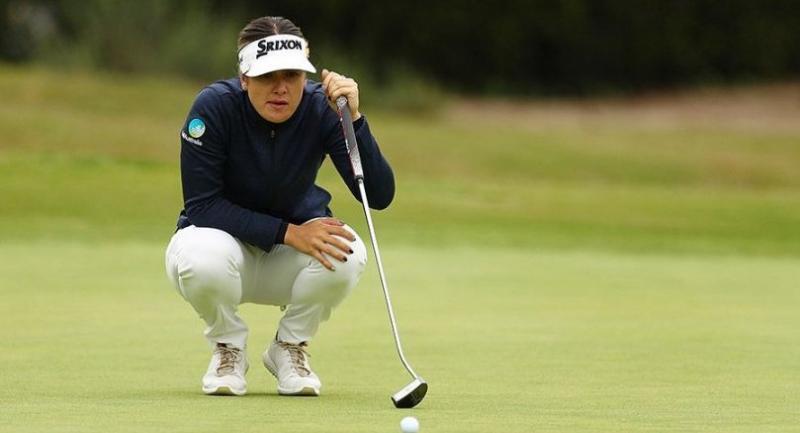 Hannah Green fired a 4-under 68 on Thursday, good for a one-stroke lead over Hyo Joo Kim and Mel Reid (69s) after the first round of the KPMG Women’s PGA Championship at Hazeltine National Golf Club in Chaska, Minnesota.

The No. 114 player in the Rolex Women’s World Golf Rankings, Green hit just six of 14 fairways, but overcame an erratic driver by requiring just 23 putts, including 11 one-putts. The 22-year-old Green is in search of her first LPGA victory this week in Minnesota. She played bogey-free golf by converting all nine of her scrambling situations.

Hyo Joo Kim birdied three of Hazeltine’s four par-5s to post a 3-under 69 and is a shot behind Hannah Green. Although she missed the cut in the U.S. Women’s Open last month, Kim’s play was largely in tune with her performance this year. Kim has fashioned three top-10 finishes this year in seven starts, with her best finish being a T-5 in the HSBC Women's World Championship in February.

Kim, who hit 12 of 14 fairways and scrambled well (5 of 6) in her opening round, has major championship pedigree, as she won the 2014 Evian Championship at the age of 19 in just her third LPGA event (she was a non-member at the time). Her best finish in the KPMG Women’s PGA Championship came in 2015 at Sahalee, when she finished in a tie for 9th.

Mel Reid carded a first-round 3-under 69, her best round in a major championship since the third round of the 2017 AIG Women’s British Open (also a 69). A current position of T-2 is the best of her career following any round of a major. Her previous low post-round position in a major came following the first round of the 2017 Ricoh Women’s British Open (T-4).

DEFENSE IS ON FOR THE DEFENDING CHAMP

Ariya Jutanugarn was plodding along Thursday, one-over par, with four holes to play. To that point, she’d only hit 5 of 11 fairways. She was grappling with Hazeltine’s length to the point she twice called for her rarely used driver. The result was a bogey on the par-5 11th hole and a birdie on 15, also a par-5.

From there, Jutanugarn hit her final three fairways, got up and down out of the rough for par on the par-3 eighth hole (she began her round on No. 10) and added three birdies to her suddenly attractive scorecard. Jutanugarn’s 2-under 70 Thursday was her best opening round in relation to par in what are now five career starts in the KPMG Women’s PGA Championship.

Thursday’s 71 was Lydia Ko’s best first round since late April, when she carded an opening 70 in the HUGEL-AIR PREMIA LA Open. Ko is searching for her third career major championship victory this week at Hazeltine, her first since winning the 2016 ANA Inspiration. Her best finish during her major championship drought, which reached 15 starts at the recently completed U.S. Women’s Open, came at the 2016 KPMG Women’s PGA Championship, when she finished runner-up to Brooke Henderson following a one-hole playoff at Sahalee.

RYU IN THE MIX (AGAIN)

One year after finishing in a tie for second place in the KPMG Women’s PGA Championship, So Yeon Ryu is tied for 10th after 18 holes. Ryu posted a 1-under 71, highlighted by birdies at Nos. 6 and 15. She bogeyed the par-4 12th.

Both Haru Nomura and Mi Jung Hur had to withdraw from the 2019 KPMG Women’s PGA Championship on Thursday due to back injuries. Both players completed nine holes before their withdrawals.

Of the 156 players who teed it up in Thursday’s first round, 26 made their KPMG Women’s PGA Championship debut. The last player to win this Championship in an initial attempt was Yani Tseng, who emerged from a playoff to best Maria Hjorth in 2008 at Bulle Rock Golf Club in Havre de Grace, Maryland.