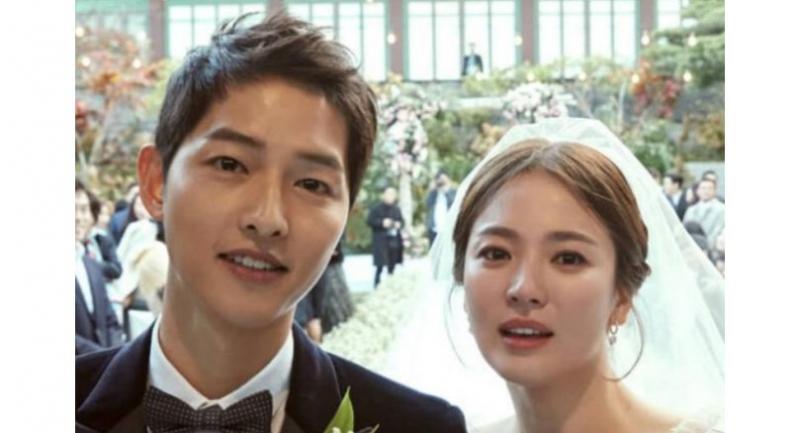 SEOUL (ANN): South Korean celebrity couple Song Joong-ki and Song Hye-kyo, who tied the knot in real life in 2017 after playing a couple in Descendants Of The Sun, have announced their split.

HERE ARE NINE THINGS TO KNOW ABOUT THE TWO SONGS:

1. Song Joong-ki, 33, shot to fame after playing a mischievous student in the popular historical drama Sungkyunkwan Scandal (2010). He was also part of the original cast of Running Man when the variety show debuted in 2010. He left Running Man in 2011 to concentrate on his acting career.

3. Song Hye-kyo famously fell for South Korean heartthrob Lee Byung-hun on the set of All In, where they played a romantic couple in the gambling drama. When they split up in 2004, it was the hottest story in South Korean showbiz.

4. Song Hye-kyo dated another South Korean heartthrob Hyun Bin after they played a couple in TV series The World They Live In (2008). They broke up after Hyun was enlisted for mandatory military service.

5. Song Joong-ki and Song Hye-kyo met while playing lovebirds in the hit military romance Descendants Of The Sun (2016). He played special forces captain Yoo Si-jin, while she played doctor Kang Mo-yeon. The show was shot in South Korea and Greece in 2015.

6. The on-screen couple announced in July 2017 that they would tie the knot on Oct 31 that year after previously denying that they were dating in real life.

7. They wed in a private outdoor ceremony in the garden of Yeong Bin Gwan at The Shilla hotel in Seoul. Celebrities who attended the wedding included Chinese actress Zhang Ziyi, Running Man stars Kim Jong-kook, Yoo Jae-suk and Haha, as well as actress Kim Ji-won and other colleagues from Descendants Of The Sun.

8. Earlier this year, South Korean media had speculated that the Song-Song couple, as they are popularly known, were going through a possible divorce as Song Hye-kyo had appeared in public without her wedding ring on several occasions. She had also deleted some photos of Song Joong-ki on her Instagram account.

9. However, Song Joong-ki was recently spotted wearing his wedding ring at a script reading session for the TV series, Arthdal Chronicles, The Korea Herald reported. He said at a press conference for the drama that being married has given him peace of mind and that his wife has been very supportive.