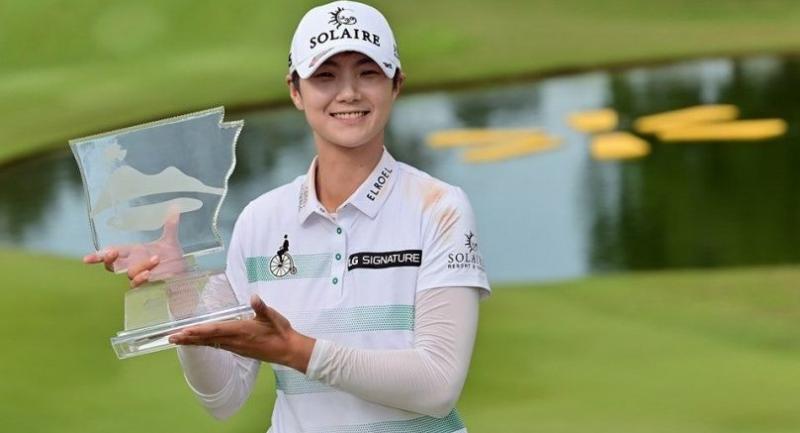 Sung Hyun Park captured her seventh career victory on Sunday at Pinnacle Country Club after firing a 5-under 66 to win by one stroke over a trio of players—Danielle Kang, Hyo Joo Kim and Inbee Park.

Park, 25, notched her second win of the season and is projected to rise to No. 1 on Monday,

Kang, Kim and Park shot identical 65s on Sunday and had to wait until Park made her birdie putt on No. 18 to find out she had the outright lead.

With her win, Park is projected to return to World No. 1 on the Rolex Rankings for the fourth time in two years. She last held the No. 1 spot for five weeks earlier this year after her win at the 2019 HSBC Women’s World Championship.

Brittany Altomare finished in solo fifth after shooting a 5-under 66 to finish at -16 and four players finished tied for sixth place at -15—Ryann O’Toole, Mi Jung Hur, Daniela Darquea and Carlota Ciganda.

Two players from Republic of Korea finished in a tie for second with American Danielle Kang – Inbee Park carded a bogey-free 65 and was in a four-way tie for first at -17 as she walked off 18 green, then Hyo Joo Kim followed suit with a 65, missing a putt for eagle on 18. Both players are searching for their first win on the 2019 LPGA season.

“It's really fun to be in the contention in a golf tournament,” said Park, a 19-time winner on Tour. “That's where I think every golfer wants to be, and that's what we play for.  I feel like my game was really, really good, just my putting wasn't falling this year. I'm probably hitting the ball better than when I was No. 1, but the putter is that important in the game, and yeah, it just hasn't been my club at the moment. But, yeah, hopefully it comes around and hopefully I can have some good putting.”

Kim fell short of her fourth-career win. “I had a really great front nine and had a great start. On the back nine, I had back-to-back-bogeys, but I came back with two back-to-back birdies,” said Kim, who has not won since her victory at the 2016 Pure Silk-Bahamas LPGA Classic. “My putting was perfect on the front, 100%. But there were a couple I left out there. Overall, I did my best.”

KANG CONFIDENT IN PLAY FROM WEEK IN ARKANSAS

Danielle Kang had a roller coaster of a front nine during the final round of the Walmart NW Arkansas Championship. After three birdies and two bogeys, it was not until No. 14 where she felt she could get back in contention. She sank an eagle and finished with three straight birdies to finish at -17.

Kang was in the penultimate pairing with Hyo Joo Kim, who was not only in her group yesterday but is also a good friend. She said she felt more comfortable with another supporting voice close by. “We definitely had a blast out there,” said Kang. “We kept answering birdies to each other. [Kim] had a good time.  And when she makes a bogey, she's like, down, so I try to lift her up as well. And she's going, ‘Come on, you can make this putt.’ And we both had a lot of fun.”

Overall, Kang is confident in what she was able to shoot on the final day. “I definitely finished well. I gave everything I got the last nine holes, so came up one shot short. Wish we could have gone to playoff, but I knew that Sung Hyun [Park] was going to have an iron in on the last hole,” said Kang. “But definitely playing well. My game is solid. I’ve finished a couple seconds, a couple fifths, thirds. I don't know what the scores are this year, but just keep knocking on those doors and hopefully I will get a win soon.”

Ryann O’Toole put together a bogey-free round on Sunday at the Walmart NW Arkansas Championship and shot seven birdies to jump up the leaderboard to end -15. She finished T6 but was happy with her overall performance in the final round.

“I'm striking it really well and I'm making putts. I definitely feel like I still left a lot out there today, so to finish a round 7 under thinking, ‘wow, it easily could have been 10,’ and to feel like I'm so close to having a win - I had this feeling last year. Last year I just ran out of holes. And I feel like the same thing happened again this year,” said O’Toole, who finished T3 at the 2018 tournament.

This year, O’Toole has extra motivation to shoot solid rounds in the coming weeks. “Solheim Cup is around the corner. I am not good on the point system. I'm just trying to show something.”

O’Toole has made one Solheim appearance in her LPGA Tour career. In 2011, Captain Rosie Jones selected the then LPGA rookie to represent Team USA, posting a 2-0-2 record in Ireland. As the summer stretch of tournaments continue, O’Toole said it is her goal to join her fellow Americans in Scotland this year.

“I mean, it's always on my mind.  I feel like that's just - that atmosphere at Solheim is definitely what I hone into. I love the team play. Growing up playing other sports, I know how it goes,” said O’Toole. “I'm just trying to show - my game has been really close, like it has been knocking at the door, so I'm hoping that I can put just start putting some rounds together and show, like, ‘hey, I might be a hot pick,’ just to be a surprise.”