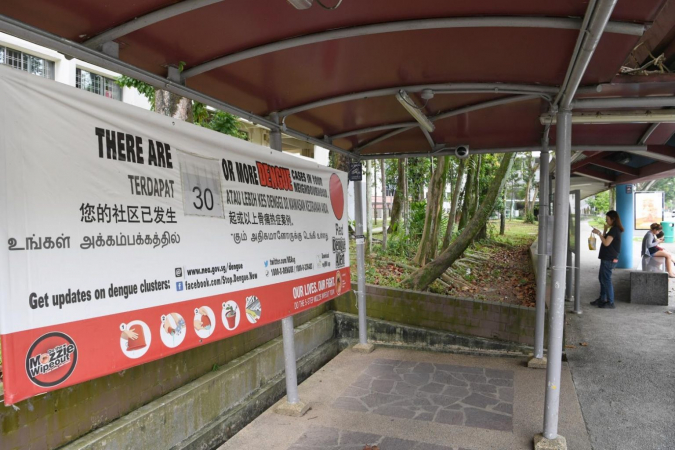 Although the overall dengue situation seems to be escalating, National Environment Agency's director-general of public health Chew Ming Fai said more than half of the 550 dengue clusters that emerged in the first half of the year have since been eliminated. ST PHOTO: KHALID BABA

Singapore's dengue problem will get worse before it gets better, as the coming dry, hot months are prime breeding season for the dengue-spreading mosquito, the National Environment Agency's (NEA) director-general of public health has warned.

Mr Chew Ming Fai told The Sunday Times that although the NEA and grassroots leaders had stepped up checks, citizens need to play a bigger role in keeping their homes mosquito-free and helping neighbours to do the same.

Urging greater community involvement, Mr Chew said: "We need all stakeholders to chip in. We're coming out of two lull years (as regards dengue cases), and there's a sense that we need to do more to raise people's awareness."

He recommended that individuals exercise their personal influence on those around them, as combating mosquito breeding required more than just individual effort.

"Very often, when we (NEA) do our surveillance, people will tell us that they've done their due diligence, but it's their neighbours who may not have done so."

Number of people who have caught dengue fever this year, exceeding the total number for both 2017 and 2018.

But instead of pointing fingers, he reiterated that individuals should remind those around them to remain vigilant and continue practising preventive measures, such as the five-step Mozzie Wipeout, a checklist of steps to prevent mosquito breeding.

An example of greater community involvement has been taking place in the Chai Chee cluster, which NEA said has had a total of 119 reported cases as of last Friday .

NEA was first notified of the cluster, which spans Chai Chee Avenue, Chai Chee Drive, Chai Chee Lane, Chai Chee Road and Chai Chee Street, in late April. Since then, there have been at least 18 outreach efforts, involving personnel from NEA, dengue prevention volunteers and people living in the cluster.

Spearheaded by the NEA, these outreach efforts see the grassroots volunteers conducting house visits from block to block to heighten awareness of the dengue situation in the cluster, as well as remind residents to take preventive measures.

An NEA spokesman stressed that residents and stakeholders all had a part to play in stemming dengue transmission in the Chai Chee cluster, and recommended that they apply insect repellent and continue checking their premises daily for potential mosquito-breeding habitats.

Although NEA has destroyed 139 mosquito-breeding habitats, data from the Gravitrap surveillance in the area indicates that the Aedes aegypti population in the area continues to remain high.

A spokesman for the Marine Parade Town Council also said they have been working closely with NEA to carry out vector control operations in the Chai Chee cluster.

Although the overall dengue situation seems to be escalating, with 499 cases last week marking the highest weekly number in more than three years, Mr Chew said more than half of the 550 dengue clusters that emerged in the first half of the year have since been eliminated.

"But this is not a reason to be complacent. It's only just the beginning of the season," he said.