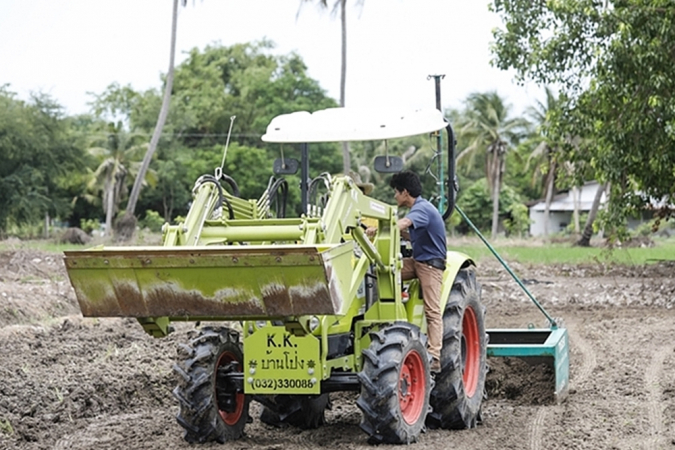 Speaking at the opening ceremony, Doojduan Sasanavin, Deputy Permanent Secretary of the Minister of Agriculture and Cooperatives stressed that improved farming practices can ease the impact of climate change on the farming sector.

Farmers can cover switching costs through an interest-free loan from the project’s revolving fund which is administered by the Bank for Agriculture and Agricultural Cooperatives (BAAC).

The project is expected to reduce 1.73 million metric tonnes of carbon dioxide equivalent.

“As a result, farmers will be able to enjoy higher crop yields and reduced farming costs,” Doojduan said.

The flooded rice paddies are known to be one of the major contributors to climate change by releasing vast amounts of methane emissions, which have a global warming potential 28 times higher than carbon dioxide.

With climate change a major threat worldwide, German Ambassador to Thailand Georg Schmidt places emphasis on close cooperation to promote the concept of sustainability among the people.

“When it comes to climate change, we are all in the same boat. Its adverse implications affect people around the world. Farmers are often among the first ones concerned,” he said.

“But at the same time, they can make a meaningful contribution to tackle climate change. That is why I am glad that within Thai Rice NAMA, we are joining up to reduce GHG emissions in rice farming and encourage local farmers to pick up low-emission rice production methods that help to boost not only environmentally friendly practices, but also better productivity for increased income.” Ambassador Schmidt added.

Suriyan Vichitlekarn, Deputy Cluster Coordinator for Agriculture and Food at GIZ said: “Applying low-carbon farming techniques such as the laser land leveling, alternate wetting and drying, site specific nutrient management and straw and stubble management does not only reduce investment cost, but also enhance opportunities for the local farmers in the global markets”.

Thai Rice NAMA Project will remain in effect until 2023.