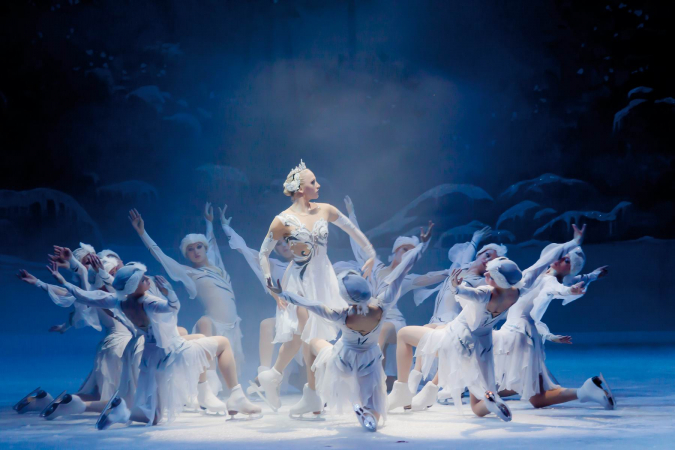 The UK-based Imperial Ice Stars are once again set to delight audiences as they bring two works with full theatrical settings to Bangkok’s 21st International Festival of Dance & Music over four nights.

They’ll perform “Swan Lake on Ice” from September 26 and 27 and follow up with “Cinderella on Ice” on September 28 and 29.

Both these productions are massive, requiring shipping in container loads of equipment and sets. Turning a theatre stage into a temporary ice stage is no easy task either with organisers noting that 14 tonnes of ice are required.

The Imperial Ice Stars was founded in 2003 by James Cundall, one of the leading producers of live entertainment in Asia and Australia, and Tony Mercer, who is regarded as the world’s foremost creator of contemporary theatre on ice.

The shows are known for their magnificent sets, opulent costumes created by Russia’s leading designers, spectacular lighting and stunning special effects, including flying, acrobatics, magic, projection, snow, fire and rain, as and when the story demands.

Tchaikovsky’s music highlights the new choreography of this “Swan Lake on Ice”.

“Inspired by Tchaikovsky’s original score and his intentions for the story, I wanted to create a more realistic interpretation. I wanted to achieve a performance of the story that left no unanswered questions. Too often productions of Swan Lake have storyboard moments that follow no logical pattern and are allowed to stay that way because that’s how it was always done or because the fairy tale bears no resemblance to real life. I just felt that I wanted to present a storyline that had a logical and real pattern throughout the show, but which would retain its fairy tale magic,” Mercer explains.

Mercer adds that his research into the background of Tchaikovsky’s Swan Lake revealed what the composer originally set out to achieve and the reasons for the various adaptations. Tchaikovsky had originally written Odette and Odile as two separate roles, but then under instruction he merged them to be performed by one dancer.

“I have reverted to Tchaikovsky’s original aim and Odette and Odile are played by different performers. In doing so, I wanted to make the Prince responsible for his own actions in betraying his promise to Odette, the promise that would release her from the curse of her swan- like existence and allow her to return to human form,” adds the artistic director.

The costumes for “Swan Lake on Ice”, influenced mainly by the Romanov period in Russian history, reflect the period during which Tchaikovsky composed the music. Both they and the costumes for “Cinderella” have been designed by Albina Gabueva, one of Russia’s top theatrical costume designers, whose 30-year career has seen her work on more than 100 opera and ballet productions at the Moscow Stanislavsky Theatre.

“Every costume is an individual design in this production, in both style and colour. Each costume has involved a lot of hand-made, detailed work, including a special technique for the costumes’ trimming. All the costumes were made by the costume cutters for the Bolshoi Ballet,” says Gabueva. The other show “Cinderella on Ice” benefits from the same treatment: dramatic interpretation, beautiful sets and dazzling costumes.

“I love the Prokofiev score, but found that ice dance didn’t sit so well with the music. Its rhythms were perfectly suited to ballet as opposed to the flow that blades require. The use of Prokofiev’s music for our production did cause me some concern,” he says.

And then Tim Duncan stepped in with a score specifically written for ice dance.

“Our telling of Cinderella holds a central theme of time and I had a desire for this to be represented in a fairly powerful and contemporary musical style. Tim’s writing of these musical themes became pivotal to the story and, as you will see when you watch the production, give the performance a new theatrical edge,” says Mercer, adding that the choreography includes some unique skating moves and marks out the ‘Imperials’ as an innovative company.

The performances take place at the Thailand Cultural Centre. Tickets costing from Bt1,200 to Bt3,000 are now on sale atwww.ThaiTicketMajor.com. For more information, visitwww.BangkokFestivals.com.