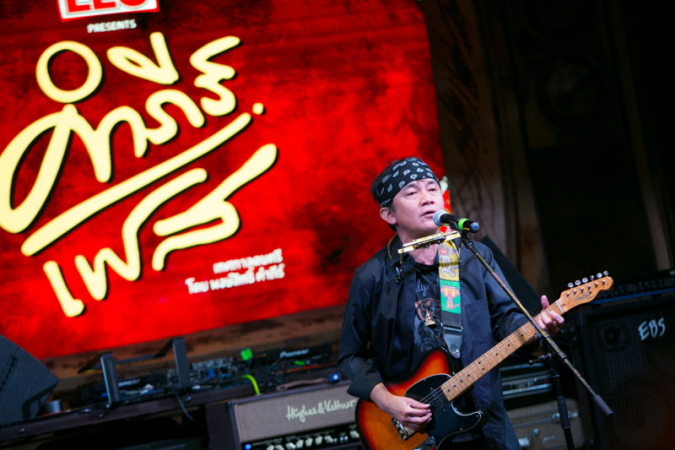 Pongsit Kampee performs during the press conference for “Kampee Fest”, which will be held at Bitec Bangna on July 20.

Pongsit “Poo” Kampee, a popular songs-for-lifer with a string of love ballads to his credit, will be back on stage on July 20 for the concert “Kampee Fest” taking place at Bitec Bangna from noon to midnight.

The 52-year-old singer will be joined by 11 pop and indie artists who recorded covers of his songs for the album, “Kampee Pleng Rak (Bot Mai)”, which was released on Warner Music Thailand last year.

“I’m very honoured that the artists of today - the younger generation - cover my songs. I’m really very grateful,” said Poo Pongsit, during a press conference at DNA Club in Ekamai Soi 5/1. “I hope everyone will come to enjoy the show by the younger generation of artists who will sing the covers of this old man’s songs.” “We didn’t change the melody of ‘Jai Bongkarn’ but we do perform it in our own unique style,” said Kanawin “Boat” Cheartaww, the singer of Somkiat. “We get a terrific response whenever we perform Pongsit’s songs at our shows. They are really timeless.”

“Like Boat Somkiat, I’ve played ‘Khae Nan’ at several pubs around the country and got the good feedback. People wouldn’t immediately latch on when I played the intro but as soon as I swung into the first verse, they screamed and applauded,” adds Lek Greasy Cafe. “We were very comfortable with making this cover.”

KijJazz Monotone rearranged “Khid Thueng”, for Singto Numchok while Chart Suchart changed the bright sound of a major scale in “Peek Hak” to the melancholic mood of minor scale.

“I feel like this song is about mem a guy who left his birthplace upcountry for Bangkok,” said Chart.

“I felt comfortable when we did the cover of ‘Talod Wela’,” said Musketeers’ Chakri “Ten” Larpboonruang. “When we are tired of life, this song could make us feel better.”

Tickets are now on sale at Thai Ticket Major.com.